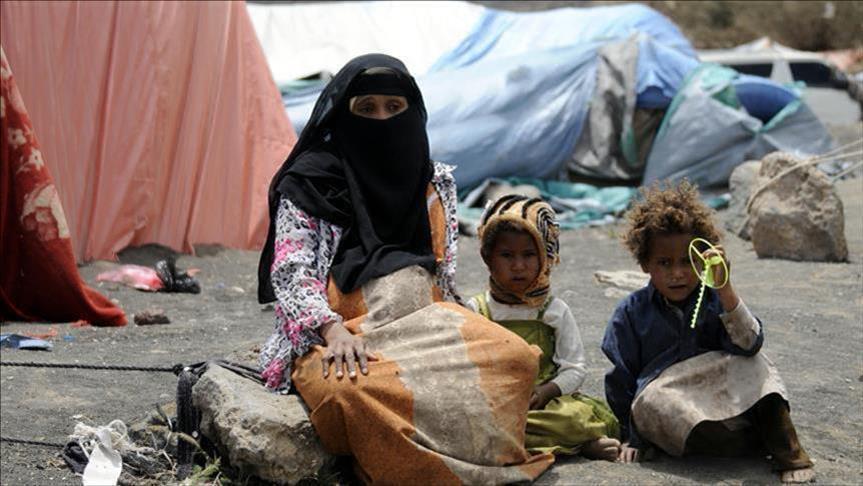 In Wednesday report, Reuters shed light on sufferings experienced by Yemeni internally displaced persons (IDPs) following the 4.8-year-old war in the country, especially the women and children living in camps outside the capital of Sana'a.
Widow Samirah Nasser and her eight children tried to return to their Yemeni village but were forced by relentless air strikes to return to the relative safety of refugee camp, Reuters said.
Shivering through yet another camp winter, she is one of 3.6 million Yemenis - around 12% of the population - displaced during a nearly five-year war that has spawned what the United Nations says is the world's most urgent humanitarian crisis, according to the report.
"When we returned (to our village, planes were in the sky. They hit the market full of kids," Nasser told Reuters. "I banned the children from going to school, fearing the warplanes."
The air strikes have deterred Nasser over the past three years from attempting another return to her native region in Sa'ada, heartland of the Iran-aligned Houthi movement that has been battling a Saudi-military coalition since March 2015.
"The war there does not stop. Our houses are destroyed, we don't have anywhere to stay, nothing," said Houriya Muhammad, a 40-year-old mother-of-three also unable to return to Sa'ada, where she used to sell pots.
Both women now live in a refugee camp in Khamir, some 2.5 hours by road from the capital Sana'a. Life is very hard in the camps, where facilities are rudimentary.
"We are dying of the cold," said Muhammad. "My kids and I sleep wedged together with three or four blankets on us."
Children, with runny noses, warm themselves near open fires. Water leaks through holes in the makeshift tents.
More than 100,000 people have been killed in the conflict, which has crippled basic services and infrastructure and ravaged the economy. More than 11 million people struggle to find enough food, and 240,000 people are living in famine-like conditions, according to the World Food Program (WFP).
Nor are the refugee camps as safe as aid organizations would want.
"Fighting is taking place less than 10 kilometers (six miles) from some of the main camps," said Sultana Begum of the Norwegian Refugee Council.
People trying to reach safety can be hampered either by Yemen's mountainous terrain or a lack of money and identification papers, Begum said.
Yemenis continue to be displaced from fresh conflict areas, with almost 400,000 people driven from their homes in 2019.
But it is not all bad news. Food security has improved over the past year and the WFP now feeds 12 million people a month.
Diplomatic initiatives have led to a decrease in air strikes in recent months and semblance of normality has returned to some large cities.
"We can sleep and our children can go to school without fear," said Abd Rahman Shouei, 28, a resident of the major port city of Hodeida who ekes out a living by washing cars.
"True, there is no work, roads are closed and we have no electricity, but the situation in Hodeida is better now because there is no fighting or bombing."
Hodeida is the entry point for most of Yemen's imports and a lifeline for millions. A truce in the Houthi-held city has largely held for more than a year, though a withdrawal of troops agreed last year has stalled and there are intermittent clashes.
In another flashpoint city, the port of Aden, residents also report some modest improvements in daily life despite continued tensions between Yemen's internationally recognized government and southern separatists.
"Electricity has improved, but water and sewage still fill the streets," said Muhammad Omar a 56-year-old government worker said. "We live in a state of neither war nor peace."