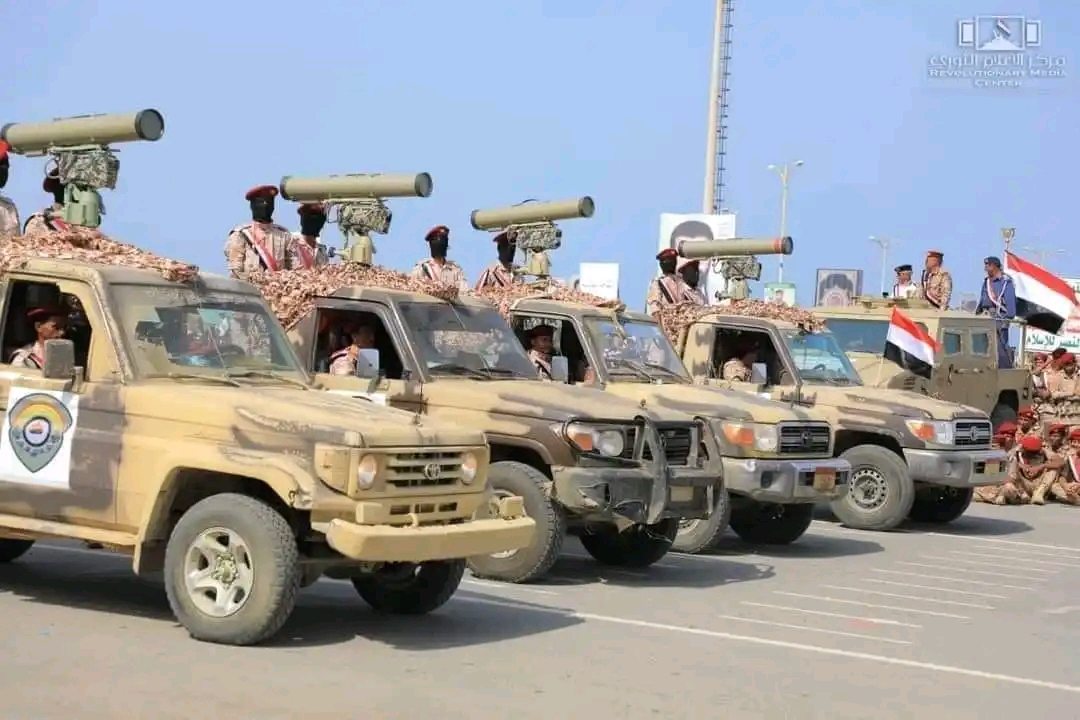 Report (Debriefer) The Iranian-backed Houthi group on Thursday, 1 September, introduced a new set of missiles and other advanced weapons at its largest parade since the breakout of Yemen's 8-year-old war. By the parade of its Houthi arms, Tehran tried to send a strongly-worded threat message to many parties, mainly Saudi Arabia and its Gulf neighbors, saying "we're here".
This threat message, according to observers, cannot be read away from developments in the nuclear talks between western countries and Iran that presses for the optimum gains, mostly in terms of lifting the economic sanctions and allowing for oil export resumption.
The arms – displayed by the Houthis at the show of strength in Hodeida port city on Red Sea – included a collection of newly-introduced surface-to-sea ballistic missiles and a large variety of fatal naval mines.
"The Houthi group and Iranian supporters carefully chose Hodeida city, as a place near Bab al-Mandeb to conduct the 'Second Warning' military parade in this given time, in order to convey an obvious threat message to rivals," political and military experts told Debriefer separately.
Proud of strength and capacities obtained by his group, the Houthi leader did not conceal a warning tune that came this time clearer and stronger in his speech aired by Houthi media on Thursday, in coincidence with the parade.
Having started in this phase of the truce, these military reviews are aimed to send a message to greedy enemies, Abdul Malik al-Houthi said in his speech.
Separately, chairman of the Houthi Supreme Political Council said his group "now possesses a considerable naval force able to his the farthest point on the Red Sea from any place in Yemen."
This development comes as part of the "battle fought by the Yemeni people against the aggressive coalition," Mahdi al-Mashat added, warning the "enemies" of any potential gambles.
Among the Houthi new arms are long-range Mandeb2 and average-range Faliq1 missiles and Karar, Sadaf and Aasif4 naval mines.
Notable was the display of the Russian-made "Ropige", very advanced ballistic missile that is used to hit giant warships and submarines and has huge capacity to destroy aircraft carriers, according to military experts.
With its indications and messages, the Houthi military parade drew wide reactions at official and public levels.
For some, Houthi show of strength suggests soon resumption of fighting and collapse of the fragile truce, which the UN has been exerting great efforts to help hold despite the repeated breaches since its very beginning.
For others, the parade was a "dangerous development" offering another evidence of the Saudi-led coalition's weakness and failure.
Having thought that the 'Decisive Storm' could defeat the Houthis within few weeks, what excuses may Saudi officials and coalition commanders give to their allies and supporters who see the increasing growth of Houthi strength throughout 8 years of military invention in Yemen?