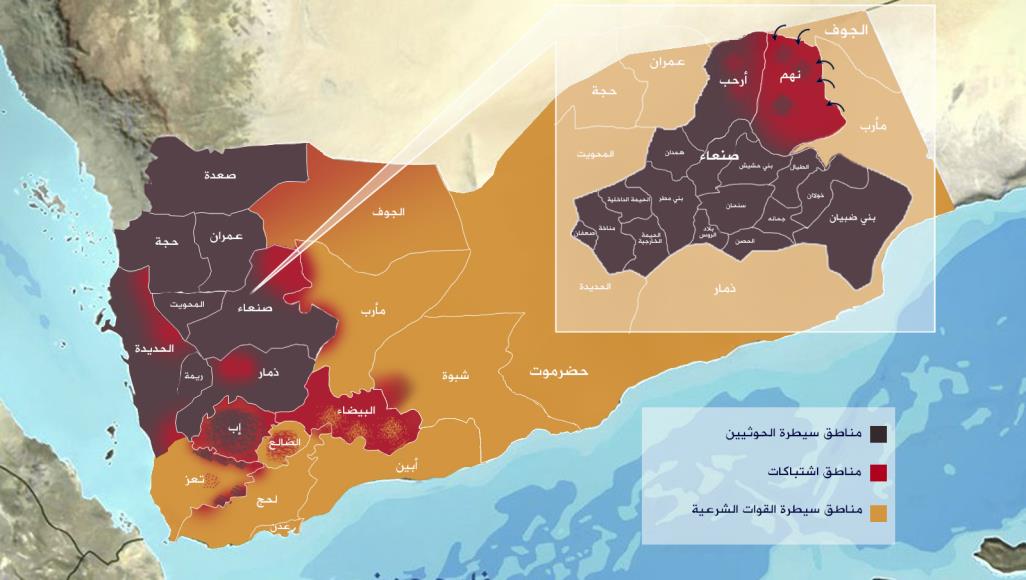 The commander of the joint operations at the Yemeni internationally recognized government, Major General Sagheer bin Aziz, called on the army forces to advance towards the capital, Sanaa, to recover them from the grip of the Iranian-backed Houthi group (Ansar Allah).

In a voice message sent to the army, Ibn Aziz said: "They went towards Sanaa to inject the blood of the Yemenis and the return of the displaced to their homes, and to secure the children and women from the oppression of the militias."

"Our appointment is Sanaa.", he added.

The call for the joint operations commander came at a time of intense fighting in the Nehm front, east of Sanaa, five days ago between government and Houthi forces.

Governmental military sources said that the army is achieving victories, which it described as overwhelming along the Nehm front, amid heavy Houthi landslides and losses.

"The fighters of the Saudi-led Arab coalition launched air strikes on Houthi fighters in several locations in the Al-Madfoun area and other areas in the Nehm front.", according to sources

Earlier on Tuesday, a military source told the media center of the armed forces, that the government forces' artillery destroyed combat mechanisms and military units that were carrying human reinforcements for the Houthis north of the Gashab mountain range of the Directorate, which led to the killing of all those on board.

The source said that the government forces have regained control of a number of strategic sites, the last of which is the Garshab mountain range.

As the Houthis keep their news and information on the course of the battles in Nehm, the Houthi-run "Al Masirah", in a brief news on Tuesday evening, said that Arab coalition warplanes launched five air strikes on the Nehm district.