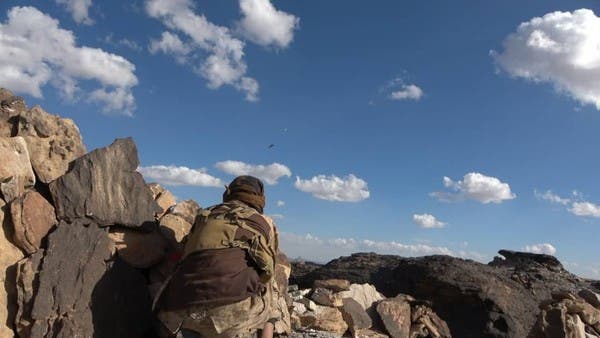 The Nihm front, to the east of the Yemeni capital of Sana'a, has been witnessing fierce fighting since early Friday.
The Yemeni internationally-recognized government is talking about great gains against the Houthi group.
The fury operations led by government forces indicate Houthi obduracy in peace talks, and that the rebels would only make concessions if defeated at a key front, according to observers.
The Houthi 'death battalion' has surrendered to government troops at Nihm front, the Saudi Al-Arabia TV quoted military sources as saying early Tuesday.
The surrender has come after the battalion's Commander Jabir al-Moa'id, Houthi recruitment officer in Nihm Yahiya Mohamed Fadhil, and scores of Houthi fighters were killed in violence clashes that lasted more than thirty hours, forcing the battalion to submit, the sources added.
This is a painful blow suffered by Houthis, after the government forces made many wins at the same frontline of Nihm, the sources claimed.
"The national army has liberated a mountainous ring in the right front of Nihm," the government forces' media center said last Monday.
The army forces continue advancing as Houthi fighters retreat and flee fighting field, the center added, displaying a footage for some of the "battles fought by government troops in Nihm."
On Monday, General Tariq Saleh, commander of Republic Guards, announced his forces' readiness to participate in Nihm fighting beside government troops, a position hailed by some of his opponents.
"We're ready to support the national battle fought by Yemen's heroes in Nihm, with all what we have and all what we can," Tariq said on Twitter, calling on "all Yemenis to unite behind this battle."
Noticeable Combating Activity
Since the beginning of this week, the battles have not been limited to Nihm, as other frontlines have also seen visibly agitated fighting.
A number of Houthi fighters have been killed, government military sources said Monday, as the rebels tried to infiltrate into government sites in the central governorate of Baydha.
"Houthi fighters, including commander Habeeb Saleh Moharam al-Qahtani, were killed and others injured when they tried to infiltrate into sites near al-Wahbia in al-Sawadia district," the Riyadh-based Saba quoted military source as saying.
"Other Houthi fighters were killed or wounded in clashes with army forces" in the two districts of Nati'e and Malajim.
Last Saturday, scores of Houthi fighters were killed and injured in attempted infiltration in Fadhha of Malajim district, to the east of Baydha.
On Sunday, the government forces successfully drew a group of Houthis in Hareeb, Nihm, where more than 13 rebels, including field leader Abu Thabit al-Madani, were killed.
The Houthi group has not inflicted such heavy losses for a long time. The Yemeni government and Arab coalition have apparently set a time limit to advance in several frontlines, particularly Nihm.
It is not the first time the government forces intensify attacks on Houthis, but this time the offensives come after a long winter hibernation.