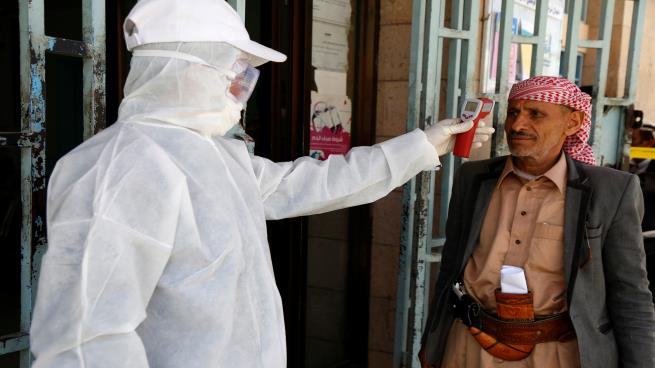 The novel coronavirus devours the Yemenis' food, the New Arab (or Al-Araby Al-Jadeed) paper said Tuesday, as the goods supply is about to deplete and oil decline threatens Saudi Arabia.
"While no COVID-19 infection has been recorded so far in the country, Yemen – which has been racked by a grinding war for more than five years – is facing the consequences of a virus affecting the global economy amid a recorded decline in oil prices," the paper sees.
Since 2018, the Central Bank of Yemen has been depending on cash reserves in the form of a Saudi deposit (of one billion dollars used for importing basic food supplies) that is about to finish.
The Yemeni internationally-recognized government "received serious promises from Saudi authorities to reimburse the deposit, once 50% of the Riyadh Agreement is applied, with emergency oil donations provided from time to time to operate public power plants in Aden and other southern governorates," the paper quoted firsthand sources as saying.
On 5 November 2019, the Saudi-brokered Riyadh Agreement was inked by the Yemeni Saudi-backed government and the UAE-backed Southern Transitional Council in Riyadh.
However, the paper thinks, the world's economic changes caused by COVID-19, rapid decline in oil prices and the stalled application of the Riyadh deal may lead Saudis to reconsider their deposit-renewal promises to help the Yemeni government meet its fiscal obligations, including food imports.
The war-torn country's food stock risks depletion following the currently halted importation amid the country's depreciated currency and risks of famine.