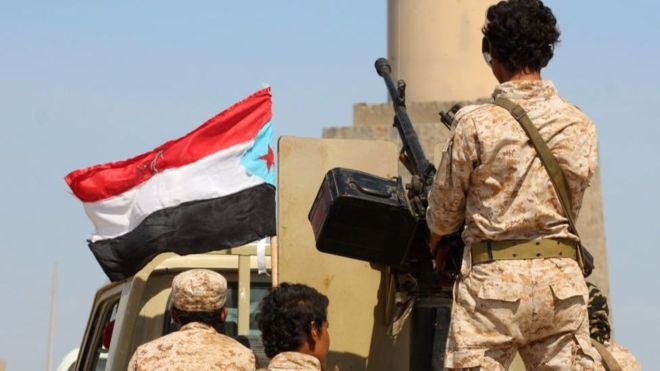 In separate statements, authorities of Hadhramout, Shabwa, Socotra, al-Mahara, Lahj and Abyan declared rejection to the STC announcement, and adherence to loyalty to the Yemeni legitimacy and President Abd Rabbu Mansour Hadi.

The STC self-governance announcement is in "violation of legitimacy and the Riyadh Agreement," Hadhramout statement read.

"Hadhramout governorate and its provincial authority stand in one rank behind the political leadership and President" Hadi, it added.

In Shabwa, the security committee said the "President of the Republic is solely authorized to declare a state of emergency.

"We absolutely reject the STC announcement ... Militias cannot be alternative to the State and its institutions," it added.

For Socotra governorate, the STC announcement is a "coup against the Yemeni legitimacy and Riyadh pact," confirming its support to Hadi government.

Mahara local authority also expressed devotion to the UN-recognized President and rejected the STC declaration that deepens "the standing crisis" in the war-torn country.

In Lahj, the provincial leadership called for intervention by the Saudi-led coalition and return to the Riyadh Agreement.

The same calls were echoed by the local authority of Abyan governorate.

Saturday midnight, the Emirati-backed STC announced state of emergency and autonomy in Aden and other southern provinces, effective from Sunday dawn.

The legitimate government has failed to fulfill its duties, STC chairman said in a statement, accusing the Saudi-led coalition of "unjustifiably keeping silent" at such actions.

For its part, the internationally-recognized government dubbed the STC announcement as "a continuation of the armed rebellion and an absolute withdrawal from the Riyadh Agreement."

On 10 August 2019, STC forces seized full control over Aden, seat of the official government, after 4-day fierce clashes with the official army that left 40 people killed and 260 others injured, according to UN release.

"The so-called transitional council refuses to listen to reason and fulfill its onuses under Riyadh pact, and insists on evading and covering its failure by announcing the persistence of its armed rebellion against the State," the Yemeni foreign minister tweeted.

The STC is accountable for "perilous, catastrophic ramifications of this announcement," FM Mohamed al-Hadhrami added.

Yemen has been divided following the 5-year civil war that broke out when the Iranian-backed Houthis ousted the official government late in 2014.

On 5 November 2019, the Saudi-brokered Riyadh Agreement was inked by the Yemeni government and the UAE-backed STC in Riyadh.

However, most of the deal's provisions have yet to be implemented.