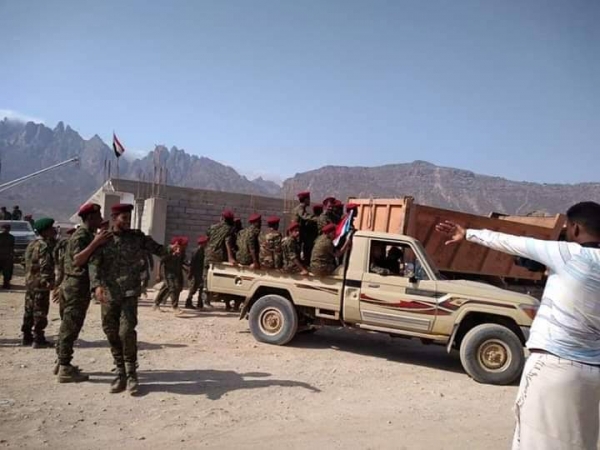 The military situation remains tense in the Governorate of Socotra Archipelago between the forces of the (legitimate) Yemeni government and the Southern Transitional Council (STC), supported by the United Arab Emirates, despite the intervention of the Arab coalition led by Saudi Arabia.

The reason is that the staff of the brigade's 1st Staff, Marine Bahri, Acting Commander in Chief, Brigadier Nasser Qais, has rebelled against the government and local authority appointed by it.

Local sources said that Saudi Arabian Airlines flew over the sky of Socotra on Saturday night and launched light bombs at the headquarters of the 1st Marine Brigade in the Hadiboh district.

The militants of the Southern Transitional Council (STC) control the brigade and its weapons stores, and they announced their refusal to hand the brigade over to its new commander, Brigadier Ali Salmin Ahmed, who was appointed by Yemeni President Abdrabbuh Mansour Hadi.

In Socotra violent clashes took on Friday place following an attack carried out by the Transitional gunmen, backed by individuals and splinter brigade officers from the 1st Marine Brigade.

Saudi mediation intervened to stop the confrontations, and a coalition committee concluded an agreement between the government and the transitional parties, stipulating the return of all military units to their barracks and the receipt of security and joint naval forces in addition to a Saudi force protecting the entrances to Hadibo district, the capital of Socotra governorate.

Al-Jazeera TV quoted a government source as saying, "The commander of the Transitional Council on the Yemeni island of Socotra still refuses to hand over the first brigade."

Observers believe that Saudi Arabia managed to block the road to the Emirates, which seeks to control Socotra by deploying its forces in large parts of Socotra, located on the eastern coast of Yemen.

Observers confirmed that the Saudi intervention came at an appropriate time, as the UAE-backed STC was about to complete its control of the government complex in Socotra.