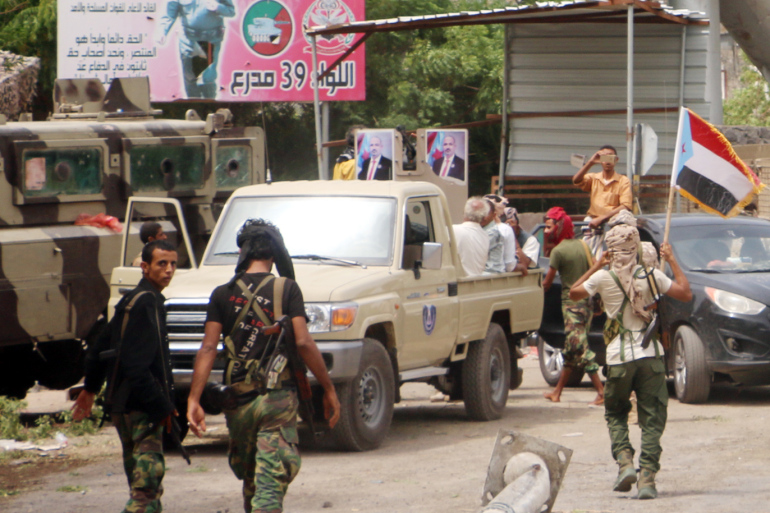 Thirty years ago, the governorate of Aden was celebrating the achievement of the Yemeni unity, but today, after three decades, it tries to get out with great difficulty from all economic and health disasters, it turned it into a city infested and afflicted by bad public services.

On the eve of the thirtieth anniversary of Yemeni unity (Thursday evening), one person was killed and several wounded during angry protests against the "UAE-backed" transitional council in the temporary Yemeni capital, Aden.

Field sources said that the transitional forces fired live bullets at the demonstrators who gathered in the Crater District to condemn the poor and lack of public services, demanding the return of the legitimate government.

The sources pointed out that the demonstrators cut off the streets of Crater with burning tires, condemning the Electricity outages and "blackmailing the security belt forces of the Crater by imposing illegal levies."

The demonstrations come on the eve of the thirtieth anniversary of the achievement of unity between the two parts of Yemen on May 22, 1990 in light of the catastrophic conditions in Aden and Yemen in general.

For his part, the Minister of Information in the Yemeni government, Moammer Al-Eryani, called Wednesday evening the STC to spare Aden the scourge of chaos and lawlessness and establish security and stability.

Al-Eryani said that "the afflicted Aden does not deserve this deteriorating situation," noting that Aden "has provided her, since its liberation, a historic opportunity to develop infrastructure and services."

Al-Eryani accused the transitional council of obtaining "public revenues in Aden and the southern regions, especially in light of the outbreak of the Covid-19."

Earlier on Thursday, Doctors without Borders (MSF) said it cannot counter COVID-19 in the Yemeni southern port city of Aden.

Number of the deaths at the MSF-run COVID-19 center in Aden reflects a wider disaster within the province, the French charity added in a statement, calling on the UN and donors to exert more urgent efforts to boost response.

The only center assigned for curing COVID-19 infections has received 173 patients as of 17 May, 68 of whom have died.

Many of the patients arrive at the center with symptoms of acute difficult respiration, which makes saving their lives a hard task, while indicating that there are other infected people in their homes, the statement read.

MSF makes every effort, but it is impossible to counter this virus alone, says Director of MSF's operations in Yemen.

It is immoral the world leaves Aden and the rest of Yemen alone in the face of this crisis, Carolyn Siegen added.

On Monday, May 10 this year, the national supreme emergency committee for Covid-19

in Yemen, Aden, declared a city endemic, after high incidence and death of corona and other epidemics.