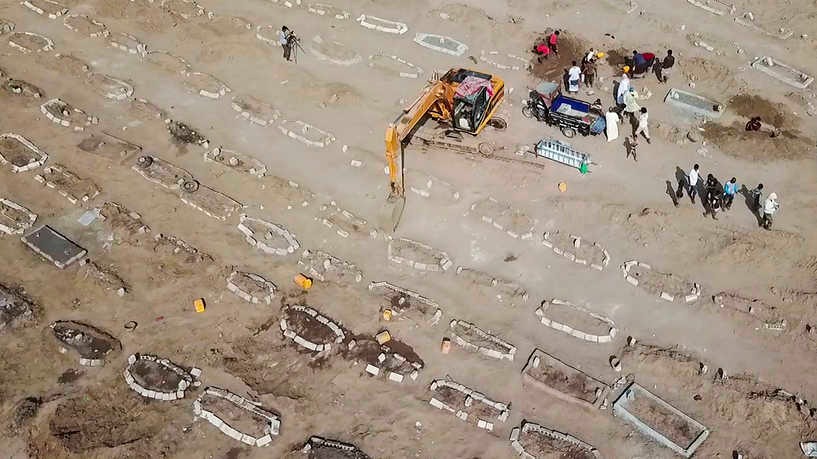 Spike in deaths in the Yemeni interim capital of Aden motivated The Associated Press to closely find out what exactly happens there.
At a cemetery in Yemen's largest southern city, dozens of fresh graves are a testament to a spike in deaths amid the coronavirus pandemic, the AP said Sunday in a report.
The cemetery workers who bury the newly deceased do not know what killed them. But there is no denying that there has been an increasing number of people getting sick in the port city of Aden – likely from the coronavirus.
Many are buried with few precautions and only a small number of attendees. Workers wear mask or cover their faces with a cloth.
Mohammed Ebeid, a gravedigger in Aden, says there has been five times the normal traffic, with 51 burials in the last week at the cemetery where he works.
"This is something strange, we've never seen it before," he told the AP late last week.
The international aid group Doctors Without Borders (MSF) has reported a spike in deaths and infections from coronavirus, including health workers at a facility it runs in the city.
Residents of Aden had previously said several hospitals shut their doors, as health care workers feared contracting the virus while lacking protective equipment.
The spike has also exposed the extent of the virus' spread in the war-torn country.
Caroline Seguin, MSF's operations manager for Yemen, told the AP on Friday that the mortality rate at their facility treating COVID-19 patients was "very, very high," and that a lot of people have arrived "almost dead, or already dead."
MSF said in a statement last week that the high number of deaths at its COVID-19 treatment center in Aden "speaks to a wider catastrophe unfolding in the city."
The key southern port has recently witnessed a new chapter of political infighting between government forces and southern separatists who declared self-rule last month, leaving health authorities in disarray.
On the first day of the Eid al-Fitr, health authorities in Aden recorded 62 deaths of epidemics.