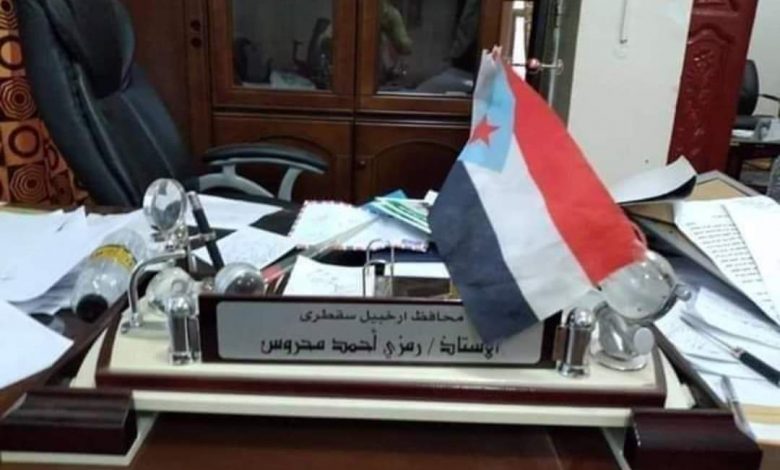 The Yemeni internationally-recognized government seems to be in a real dilemma with repeated critical statements, absolute objections and appeals about acts by the Southern Transitional Council (STC) in southern provinces. These areas are apparently held by the UAE-backed STC, but in reality Abu Dhabi and Riyadh share the control there and are dragging the helpless government troops to bloodshed.
In its rhetorical statement, the Yemeni government appeared as if it was strayed and heading for an abyss after being lured to it by Saudi Arabia, whose help had been asked by a government expelled from two capitals within five years.

Despite the Yemeni government's warnings in its statement, the STC has kept taking control of other sovereign sites, the last of which was the local authority office of Socotra governorate on Friday.
"STC gunmen stormed into the governor office in Socotra's provincial capital, Hadibo, and took full control of the building after the government troops withdrew helplessly," local source told Debriefer.
Earlier on Friday, the STC forces seized the general security department's office in the Indian Ocean archipelago.
Telling Debriefer about the scenario of the last overthrow against legitimacy in Socotra island, locals say: STC "armed men violently attacked the government forces, using heavy weapons and artillery they had already received from the United Arab Emirates, as well as arms taken from a marine brigade that had been early seized by STC forces."
In his comments on recent developments there, the official government's minister of information dubbed the STC's "attacking governmental and security offices, terrifying people in Hadibo and bombing the city with heavy weapons" as serious escalation.
"The State has been warming to prevent Socotra from being turned into a ground for political enticement or military conflict," Moammar al-Eryani added on Twitter.
"We remind all those conspired and supported the STC-led mutiny that the Yemeni people won't stay handcrafted before this cruelty targeting the national unity and serving none but the Houthis."
Friday events in Yemen's largest island have triggered anger reactions from many Yemeni analysts and activists supporting the UN-recognized government.
"According to my reliable sources in Socotra, Saudi troops have not only paved the way for the STC's forces to raid Hadibo, but also given them the opportunity and ability to attack the government army from sites they [Saudi troops] handed to UAE subordinates," says Ahmed al-Shalafi, a Yemeni journalist working for Al-Jazeera.
Leading a coalition in support of Yemen's official government since 2015, Saudi Arabia handed Socotra archipelago to the UAE-backed STC, a Yemeni political analyst tweeted.
Those, "who want to know the real face of the elder sister [Saudi Arabia], need to watch what is happening in Socotra," Dr. Kamal al-Ba'adani added. "While they came in order to support legitimacy – as they claim – more than 1,000 fully-equipped Saudi troops side with Emirati militias with the purpose of taking control of the island.
"Rebels against the legitimacy in Socotra receive their salaries in Saudi rials and via Saudi channels," he quoted one of the island's tribal sheikhs as saying.
Once the "Emirati militias" got prepared for "raiding the provincial capital, the Saudi troops withdrew from their positions and disappeared."
Saudi media is greatly influenced by UAE, Dr. Ba'adani said, noting that Okadh paper echoes what the Emirati al-Etihad paper reports on developments in Yemen.
For another Yemeni analyst, the Yemeni legitimate government is to blame for Socotra overthrow.
The Yemeni "president, government and political parties are responsible for all this desertion," Faisal Ali, chairman of Yamanion (or Yemenis) center for studies, added. "The coalition has not only betrayed it, but also made fun of the government and supported the two coups of Sana'a [by Houthis] and Aden [by STC]."
In its "weak statement", the government blamed the STC, though its dispute is "with the Saudi-Emirati coalition," he said. The STC "is but a pawn for temporary use," in the coalition's hands.
Saudi Arabia has betrayed the legitimate government not only in Socotra, but also in Aden, which the former received last October from UAE troops so as to enable the latter to return to its interim capital.
Nonetheless, the Yemeni government is still in Riyadh tasked only with issuing statements and filing complaints at the UN, the UN Security Council and, still, the Kingdom of Saudi Arabia.