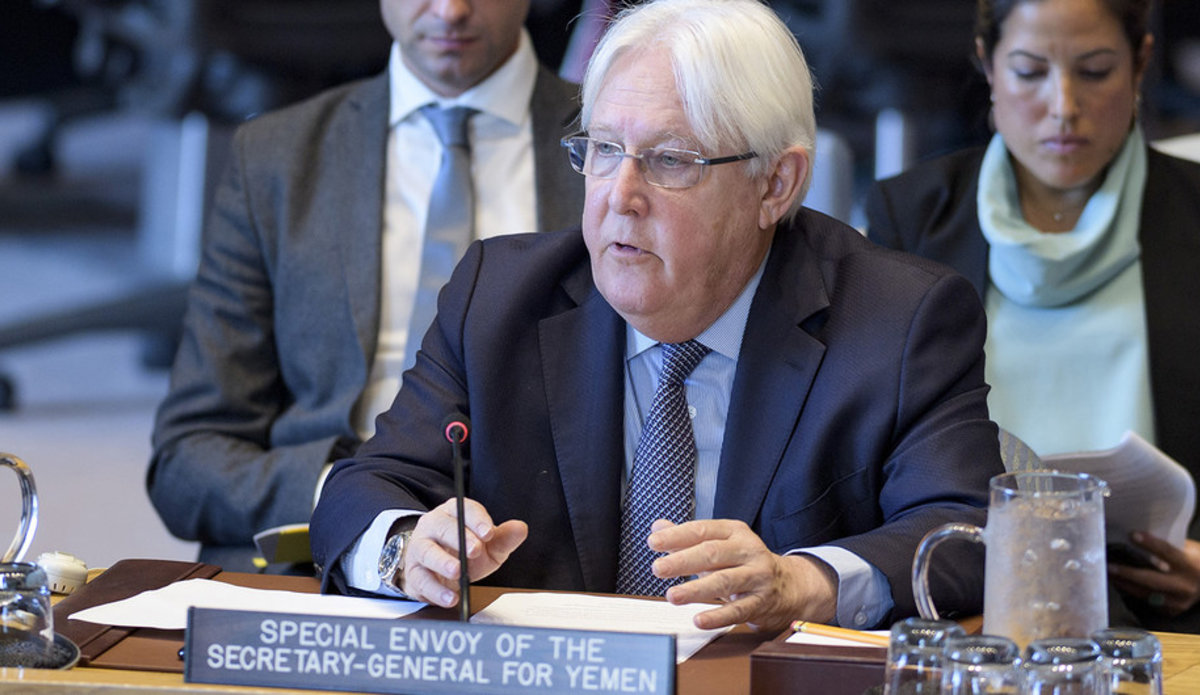 The Houthi group has notably intensified criticism against the UN special envoy to Yemen, blaming the man for all the humanitarian and health crises suffered by the war-torn country, as well as the stalled deal of prisoner swap and the unpaid salaries of civil servants.
Martin Griffiths has not attacked only by the spokesman for Houthis or that for their government, but also by many senior and second-in-rank officials in the group.
"Griffiths' statements are in conformity with those of the Arab coalition's spokesman," the Houthi information minister said Saturday, accusing the envoy of "seeking to cover the coalition's persistent crimes in Yemen.
"The coalition and the UN envoy try to hold us responsible for the siege, though they control the sea, detain ships and pressure on the people by means of economic war," the Houthi-run al-Masyra TV quoted Dhaif al-Shami as saying.
"Today, the United Nations is unveiling its ugly face, as it's participating in besieging the Yemeni people," he claimed.
Also on Saturday, head of the Houthi prisoner committee blamed the UN envoy and his team for the failure of Amman pact on prisoners.
"For more than two months, we've been being prepared for applying what was agreed to, but the coalition and loyalists have unfortunately persisted in rejecting that, and the UN has lifted no finger," Abdul Qader al-Murtadha added on Twitter.
The UN "weak" envoy has "overlooked actions by coalition powers, leading the prisoner swap deal to fail."
The Houthi attack on Griffiths has intensified since the beginning of last week, with member of the group's Supreme Political Council frequently accusing the envoy of silence at the blockade on Yemen and the coalition detention of oil tankers, or of his "role in the recent escalation" by the Saudi-led coalition and the Yemeni official government.
"We tell the envoy: Hodeida port's gates are open and the seized vessels have obtained your permissions," Mohamed Ali al-Houthi tweeted on Friday in response to Griffiths' call on Yemeni rivals to allow access for ships.
The tankers are denied access by "the navy of the American-British-Saudi-Emirati aggression," he added, calling on the UN envoy to "contact with the US Department of State, since it's who has the authority, instead of appealing" to those who have nothing to do with the siege.
The UN envoy and his team seem to be stuck in and unable to solve the large deal of Yemen's thorny problems and crises, despite the man's patience,  composure and diplomatic persuasive, optimistic oratory.
Martin Griffiths was appointed as the UN envoy for Yemen on February 16, 2018. His career says the man has wide experience in conflict-settlement, negotiation, mediation and human affairs. He had served as the European Institute for Peace's managing director, an advisor to three UN envoys for Syria and vice-chairman of the UN monitoring mission to Syria, in addition to his service at British diplomacy.
In Yemen, has tried to bridge the gap between warring parties and to craft humanitarian pacts in order to help Yemeni people take breaths, civil servants receive their salaries after four years of nonpayment, and hundreds of prisoners get freed.
All these efforts have, however, faced a stumbling block in the form of obduracy and baseless pretexts (to evade deals) for which Griffiths may not be blamed.
"Despite his efforts known by everyone, the UN envoy to Yemen will never succeed in his duty," say international and local observers.
"Griffiths, his predecessors and even would-be successors will face the same criticisms and fail to bring peace to Yemen," according to observers, as the players "dominating the politics and war in this country know well that their stay at authority depends on continuity of the conflict, even at the expense of a whole nation."