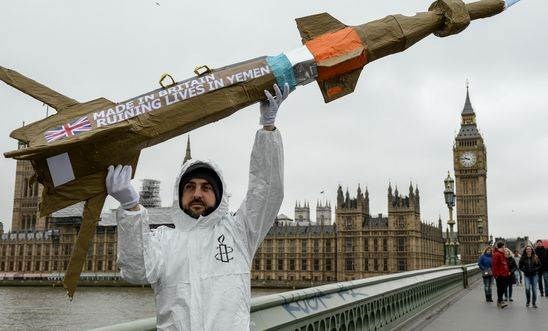 London (Debriefer) The United Kingdom restarts arms exports to Saudi Arabia while pretending to protect rights, the Independent said Wednesday in an article by Andrew Smith entitled "Britain's hypocrisy in resuming arms sales to Saudi Arabia while taking a stand on human rights is astounding".
"As we forge a dynamic new vision for a truly Global Britain, this government is absolutely committed to the United Kingdom being an even stronger force for good in the world …the measures we are announcing and enacting today, hold to account the perpetrators of the worst human rights abuses." These were the words of the foreign secretary, Dominic Raab only yesterday in a major statement that aimed to paint the UK as a defender of human rights and democracy around the world.
It is 24 hours later and the hypocrisy at the heart of Raab's posturing has been exposed. In a written statement this morning, the secretary of state for international trade, Liz Truss announced that, following a review, the UK would be resuming arms sales to Saudi Arabia for use in its war in Yemen.
The review had been announced last year following a Court of Appeal verdict that found the government had acted "irrationally and therefore unlawfully" in allowing the sale of arms to Saudi Arabia and the rest of its coalition partners that have spent the last five years unleashing a brutal bombing campaign on Yemen. The judgment, which came as a result of a case brought by Campaign Against Arms Trade, was the first time UK arms exports had been challenged in this way.
The bombardment has been aided by the political and military support offered by arms trading governments like the US and the UK and arms companies like BAE Systems.
It is hard to put a total value on the arms sales. The government's export data shows that £5.3 billion worth of arms licenses have been approved since the war began.
However, this does not include the weapons which are sold under the opaque open license system, which allows for an unlimited quantity of weapons to be sold, so the real total will be significantly higher, Smith wrote.