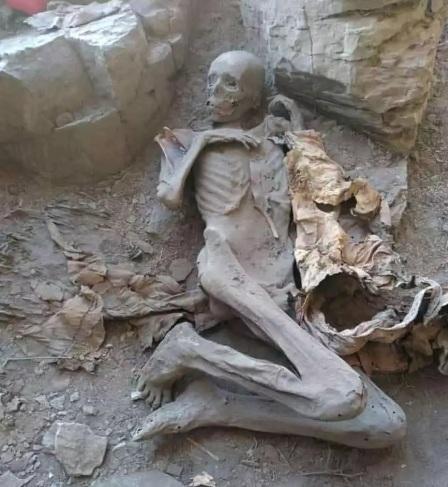 SANAA (Debriefer)--A mummy which archeologists believe to be the body of a Himyarite king who lived 2.500 years ago was found in Yemen's Houthi-controlled province of Ibb this past weekend.

It was the third discovery in one a half years in the war-torn country which has one of the world's oldest civilisations.

The director of the local office of the Yemeni archeology authority Khalid Ghalib said locals found the mummy in the district of Al-Sayani.
It could be brought from another site in the area, he said, adding that it has been kept in a safe place.

Archeologists urged to keep it where it was found to conduct studies on it.

It was the first time a mummy was found in Ibb, according to archeologists.

The first mummy was discovered in the country by a US mission in mid-1900s.

In 1938, remains of 26 people, including an intact body, were found in the area of Shibam Al-Gharas in Sanaa.

The authorities have failed to build a museum for ancient discoveries since 1990s.

Archeological discoveries in Yemen have increased during the years of the armed conflict.

A week ago, the archeology authority found a cemetery dating back 2.500 years in the area of Al-Mashhad around the towns of Rabyoun and Al-Hajrayn in the eastern provinve of Hadramout.

In August, the minister of culture in the Houthi government Abdullah Al-Kibsi announced a large archaeological discovery in the capital Sanaa.

The discovery was an ancient settlement of two types, the first was a human settlement, and the second stone tombs, both dating back to the Stone and Bronze Ages.

Meanwhile, archeologists argue that mummies dating back to 2.500 years are rare because they had been buried in unreachable rugged areas and caves.

Based on discovered  mummies, bodies had been embalmed after gastrectomy, dyed with henna, wrapped with silk and buried with food and weapons, they said.