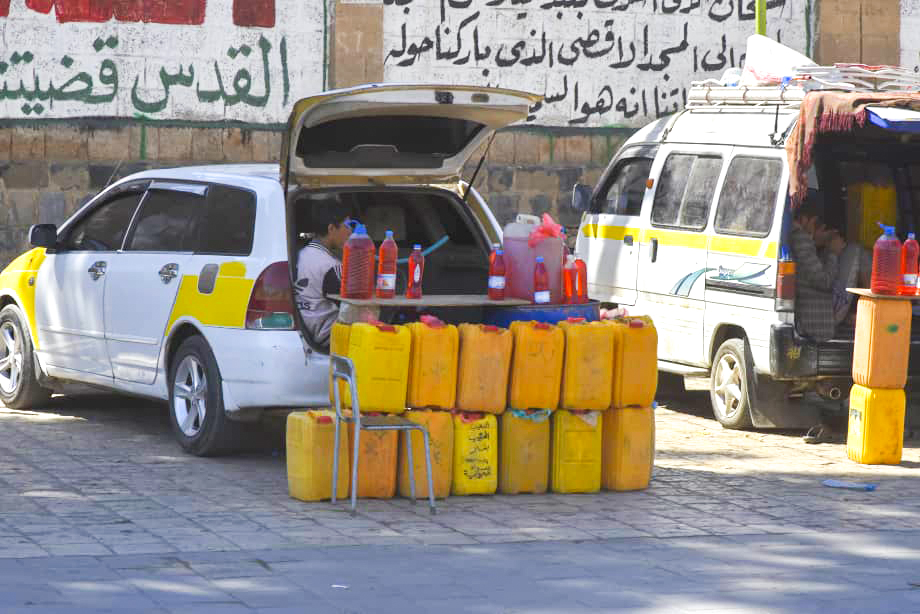 By Hasan Abu Al-Ghaith - SANAA (Debriefer)--Acute fuel shortages have been suffocating the people in the Houthi-run regions in north and west Yemen since early this year.

Despite repeated Houthi accusations that the Saudi-led coalition and the Yemeni internationally recognised government are preventing fuel ships from entering Hodeidah, people accuse the Houthi group of exploiting measures taken by the coalition to exacerbate their suffering.

Black markets spread in the capital Sanaa and other regions controlled by the group where fuel is being sold for high prices, as much as 20.000 rials per 20 litres.

The fuel prices are deepening the suffering of the people, including public servants who have not received their salaries for years. Electric power and water tariffs and the prices of basic products have sharply increased.

And while the group claims the fuel arriving in the country through Hudaydah has been imported by traders not the Yemen Petroleum Company, people are asking why those traders are selling fuel through black markets not authorised filling stations.

On Saturday, the Supreme Economic Council said the Houthi group is selling most of the fuel imports that arrive through Hudaydah seaport in the black market to finance its war.

Around 276.503 metric tons of fuel have been imported in the first half of April, which is enough to meet the fuel needs across the country for 20 days, it said.

And 70% of the fuel has been transported to the Houthi-run regions, an average of 12.000 metric tons a day, but the group has sold it on the black market, it added.

Though 40 fuel ships have been allowed to enter Hudaydah upon a request by the UN envoy to Yemen Martin Griffiths, the humanitarian situation has not improved in Houthi-run regions, the government said on Wednesday, adding that the fuel trade accounts for 54% of incomes that the Houthis spend on war.

The Minister of Information, Culture and Tourism Muammar Al-Eryani said measures the government is taking to control the fuel trade are crucial to improve the humanitarian situation, pay the salaries of public servants and put an end to the use of the fuel revenue to finance the Houthi war.

The government has allowed fuel shipments to enter Hudaydah and is reviewing technical commitment of more shipments, he said.

But the group has denied the minister's statement, saying that the coalition is still holding ten ships carrying 646.552 tons of fuel.

Earlier the Houthis said the coalition was holding between 19 and 26 fuel ships, which means their latest statement has exposed their trade in fuel that has entered the country recently.

The group profits so much from illegal trade of fuel as it is continuing to ignore its responsibilities towards the people facing acute shortages of liquidity in regions under its control, observers said.