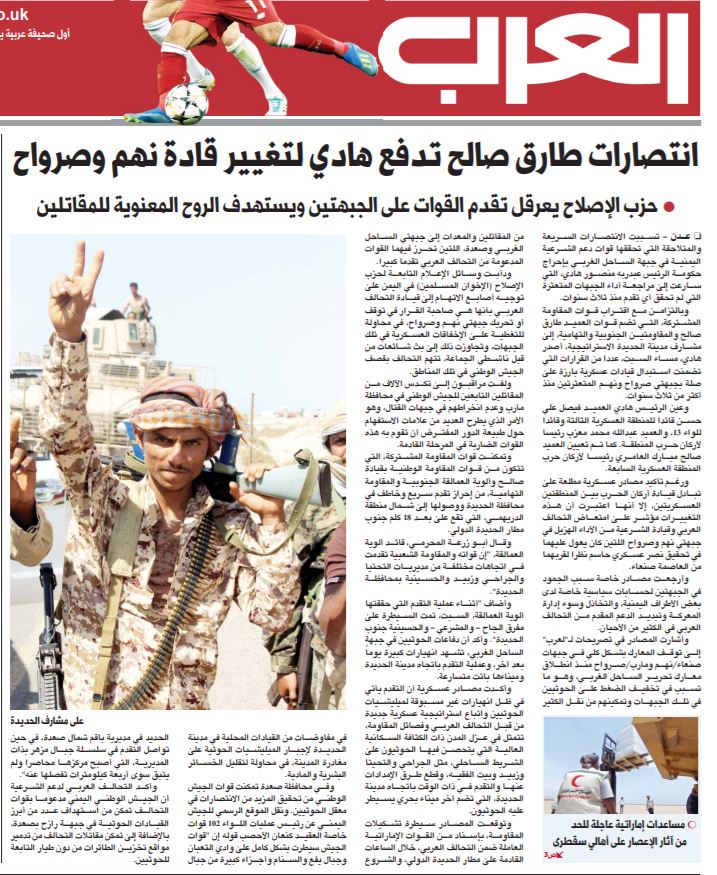 The Al-Arab Newspaper has said victories of the Joint Forces over the Houthi forces in Yemen's western province of Hodeida have embarrassed President Abd Rabbuh Mansour Hadi forcing him to fire a number of military commanders at Sanaa and Marib warfronts.

The forces of Hadi fighting the Houthis at the fronts of Nihem, Sanaa province, and Serwah, Marib province, have not progressed in three years. The two fronts are gateways to the capital Sanaa which has been under the control of the Houthis since 2014.

The paper, which is published from London, said the Islah Party, Yemen's Muslim Brotherhood, has been impeding the progress of Hadi's forces at these fronts.

The party has forces and military chiefs fighting alongside the forces of President Hadi.

Media outlets run by this party have been blaming military failures on the coalition saying the decision to move forward and win the war is in the hands of the coalition not a Yemeni faction, it said.

The Joint Forces led by the forces of Tariq Saleh, a nephew of late president Ali Abdullah Saleh, and the southern and Tihama resistance fighters, with support from the Saudi-led coalition have advanced against the Houthis seizing three districts in Hodeida. They are pushing deeper toward the Hodeida seaport and other positions to drive the Houthis out of Hodeida.

The paper quoted sources as saying that the failures at the two fronts have been blamed on factions settling political accounts, lack of good command of the battles and wasting support provided by the coalition.

The battles have been completely ceased at these fronts since the Hodeida offensive began in what has been understood as that some factions wanted to reduce the pressure on the Houthis and help them mobilize and fight back the offensive, it added.