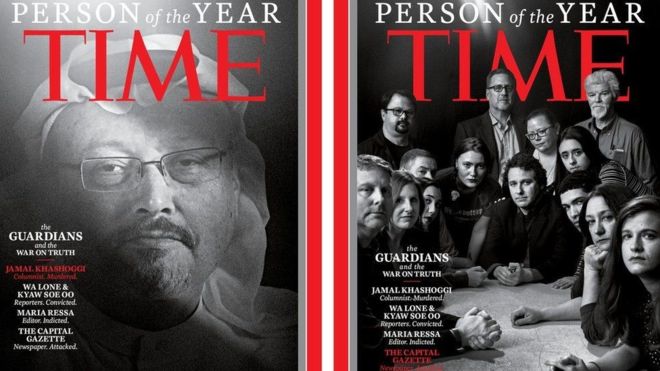 Time magazine has collectively named Jamal Khashoggi and other killed and imprisoned journalists as its “person of the year” for 2018.

The magazine gave the title – which goes to the person they judge has been the most influential over the past year – to “the Guardians and the War on Truth”.

Those named also included the journalists killed in the mass shooting at the Capital Gazette in Maryland in June, two Reuters reporters jailed in Myanmar after investigating the massacre of Rohingya Muslims and Maria Ressa, a journalist in the Philippines facing tax evasion charges that she has called “political harassment”.

“In its highest forms, influence – the measure that has for nine decades been the focus of Time’s Person of the Year – derives from courage. Like all human gifts, courage comes to us at varying levels and at varying moments,” Time magazine’s editor-in-chief, Edward Felsenthal, wrote in an essay about the selection.

“This year we are recognizing four journalists and one news organization who have paid a terrible price to seize the challenge of this moment: Jamal Khashoggi, Maria Ressa, Wa Lone and Kyaw Soe Oo and the Capital Gazette of Annapolis, Md.”

More than two months since Khashoggi’s disappearance, Saudi Arabia is still facing international condemnation over his brutal murder and alleged dismemberment at the hands of a Saudi hit team. The 61-year-old’s body has still not been found and is thought by Turkish investigators to have been dissolved in acid.

Time magazine’s person of the year started in 1927 and recognizes “the person or group of people who most influenced the news and the world – for better or for worse – during the past year”. It is decided by the magazine’s editors.