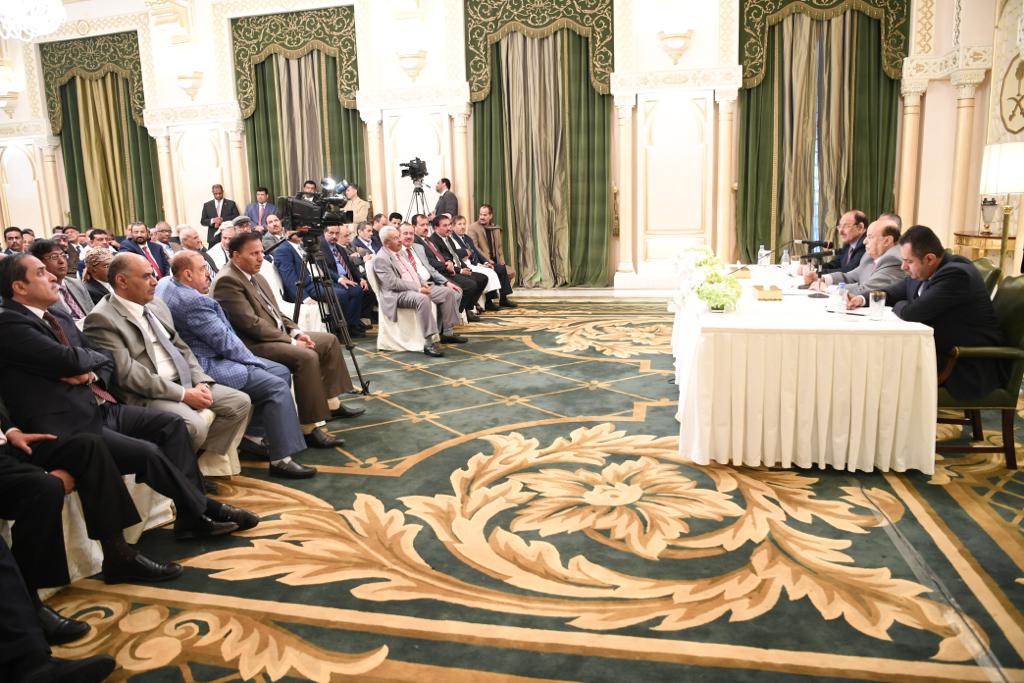 The Yemeni President Abd Rabbu Mansour Hadi on Thursday hold a rare meeting in his residence in the Saudi capital with a large group of the Yemeni Parliament.

"The meeting comes after efforts led by Riyadh," parliamentary source told Debriefer, noting that Saudi officials pressured on Yemeni legislators who fled to the Kingdom after death of late president Ali Saleh in December of last year.

"Saudi government paid bulky funds, exceeding US$ 100,000, to some MPs for their consent to attend the meeting, in addition to monthly provision equaling $ 5,000," he added.

According to the source, Saudi Arabia and President Hadi have being for long time seeking to contain parliamentarians, particularly those had adopted neutral position towards developments in Yemen and fled the 4-year-old war.

"Despite great pressures and incitements received by Yemeni MPs, Saudi government and Hadi have not yet been able to extract consent from most of them," said the source, estimating that 100 to 110 lawmakers attended Hadi meeting. A parliamentary session needs a quorum of 140 members to hold.

Under Yemeni Constitution, President Hadi needs consent of the two-third majority of the Parliament to move the legislative body from Sana'a to Aden and to elect new speakership.

Aden-based Saba News Agency stated that Hadi focused in his talks on government negotiations with Houthis in Stockholm earlier this month.

President Hadi instructed the government to pay civil servants in Hodeida and told MPs that former negotiations had humanitarian nature, according to Saba.

"Stockholm agreement saved lives of civilians in Hodeida and infrastructure of ports and city, in response to international efforts that exerted great pressures," Saba quoted Hadi as saying.

Hadi and his government sent last July messages to the UN Security Council urging its member states to back the Saudi-led coalition that was about to launch military operations aimed at retaking control of Hodeida from Houthi rebels.

Hadi and his government fled to Saudi Arabia early in 2015, after the Iranian-backed Houthis took over the capital of Sana'a and other heavily populated areas in northern and central Yemen.

Since then, Yemen has been racked by an armed conflict that escalated after the Saudi-led coalition intervened militarily in the country in March of the same year to reinstate the government of Hadi, leaving tens of thousands killed, hundreds of thousands injured, and 3 million displaced.

War also has pushed the country to the world's worst humanitarian crisis, according to the UN, with more than two thirds of the 28-million population in need for a type of humanitarian aid and immediate protection, including 8.4 million people unsure how to get next meal, and some 2 million children suffering severe shortage of nutrition.