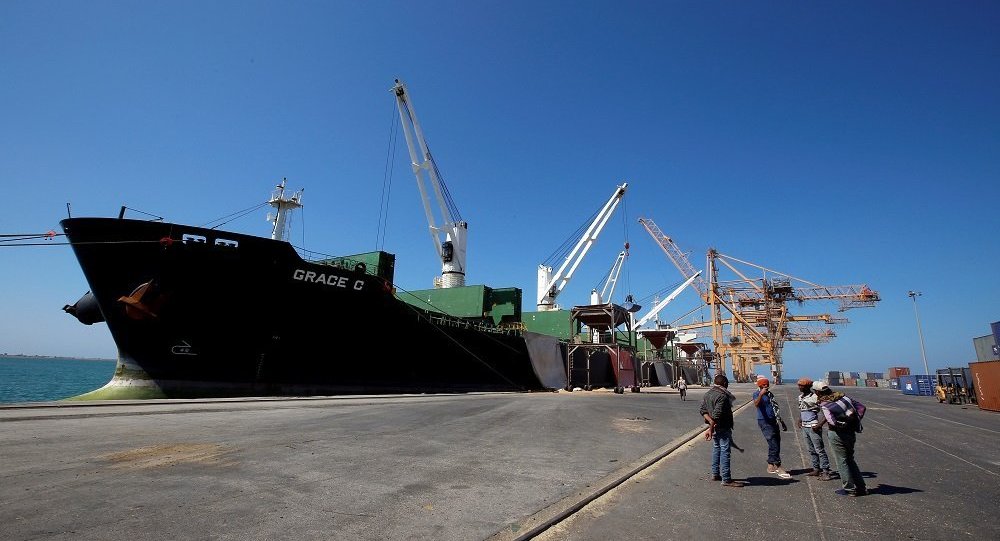 The Yemeni Houthi-run oil company accused the Saudi-led coalition of persistently seizing the four oil tankers that had been announced to be allowed into the port of Hodeida, amid fuel shortage experienced by northern provinces.

The company said in a statement,carried by the Sana'a-based Saba on Friday,that "while the Yemeni oil company announced the state of full alert and the operation of facilities and branches maximum capacity to receive the four vessels .. to meet the needs of citizens and all vital sectors and avoid them disaster, the company has been surprised to find that none of these four ships reached the port of Hodeida."

"The ship Mira loaded with fuel oil arrived at the port of Hodeida ten days after the declaration of the so-called economic commission of Aden, in clear contradiction with its successive statements, particularly on 9 and 18 April 2019, which saidit would grant approval for ships to enter within 24 hours of the importers' submission of the documents,"the company added.

The capital of Sana'a is experiencing for one week now a fuel shortage, with Houthis accusing the coalition of holding eight tankers in Djibouti and obstructing their way to Yemen.

The rebel-run oil company has warned of "the worst catastrophe" if the coalition keeps preventing the vessels from reaching Hodeida.

"We are still waiting for the four shipments that the Aden Commission released from the water jails," the company said.

Houthi oil Minister Ahmed Daris on Tuesday attributed the fuel shortage to the "aggression coalition's persistent seizure of ten oil-loaded tankers in Djibouti," noting that the oil shipments were bought from Dubai and have no problem in terms of clearance.

Lack of oil derivatives in Sana'a and other provinces under Houthi control has led to boosted black market and unprecedented hike in fuel oil prices.

Private gas stations where fuel is available see heavy crowdedness, residents in the Yemeni national capital told Debriefer, with lines of cars as long as 3 km.

High prices of fuel, combined by absence of government salaries for more than two years and a half, in Houthi-held areas still worsen the people's hard social and living conditions, as that directly reflects on basic commodities, vegetables, fruits, transportation and other services, according to residents.

On Thursday, the official government-run Economic Committee announced approval for four ships to enter Hodeida port, with 51,000 tons of fuel on board.

Earlier, the Committee issued a decision banning the importation of any oil shipment not approved by the Aden-based Central Bank of Yemen (CBY), warning that such shipments would be denied access by coalition.

The decision is aimed to stabilize the Yemeni rial, justified the Committee that is trying to restore cash flow from black market to the CBY.

Early this April, the CBY introduced a new standard mechanism, to cover oil imports into the country, between the bank, local commercial banks and suppliers. The move seemingly aims to boost stability of local rial.

But the bank gave no further details on the new plan, although there is no supplier other than the 'Arab Gulf' company owned by Eisei, a businessman closely linked to Hadi and his office's deputy director.

"After the international community has announced support for application of the Decree 75 and the mechanism of controlling and organizing the oil tradein Yemen...and after it has been clear that Houthi militias are politically trading in humanitarian crises made by them, Houthi militias pushed oil dealers in areas under their control to present incomplete applications to the Committee to gain clearance for oil shipments," said the Committee inits Thursday statement.

By such incomplete documents and incompliance with permission requirements, the "militias insist to bring suspected shipments into the country in a new attempt to shift responsibility to legitimacy and coalition."

The government has accused Houthis of "boosting the rebel-run black market with fuel left in the so-called Houthi oil company and by preventing qualified suppliers from applying for official permits over the two last months."

A UN panel tasked with monitoring of sanctions on Yemensaid last January, in its 2018 report, that Houthis received at least US$ 300 million a year in revenues of fuel shipped from Iran's ports to fund their war against the Saudi-backed official government of Hadi.