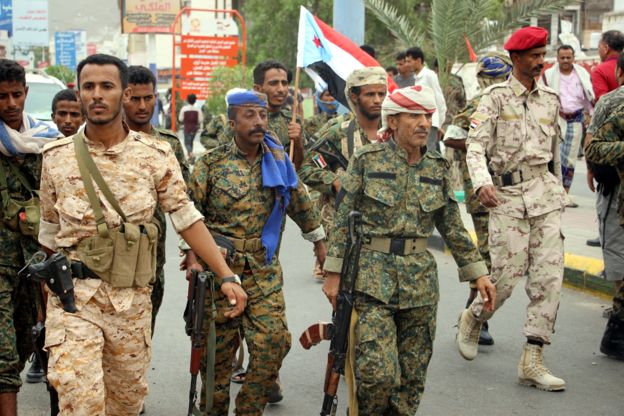 The Emirati-backed Southern Transitional Council (STC) and the General People's Congress (GPC) will take part in a new Yemeni government expected to be formed soon, firsthand sources have said, as Saudi-led coalition-brokered consultations thereon underway with the Yemeni internationally-recognized government.

Broad changes are expected to occur in the Yemeni legitimate presidency and government in the few coming days, in return for the STC's withdrawal from positions in Aden, seat of the official government, the London-based 'Arab' paper has quoted political sources.

The expected talks between Yemeni parties, called by Saudi Arabia following the separatist STC's seizure of Aden, will help restore balance within the Yemeni legitimacy, abating the Muslim Brethren-affiliated Islah party's domination over decision-making, while enhancing the participation of other Yemeni entities like the STC and GPC's anti-Houthi current, the sources added.

"Media mess, which has contributed to widening the gap between entities opposing the Iranian project in Yemen," will be mainly reviewed by the Arab coalition, according to the sources.

By these efforts, the coalition is seeking to bring all the Yemeni powers together around a media honor convention and new guidelines to abase severe disagreements between Yemeni fellows.

On August 10, Riyadh called for immediate dialogue in the kingdom between Yemeni parties disputing over Aden.

Riyadh has appreciated "the effective role by brothers in the United Arab Emirates and their constant efforts to cope with events recently seen by Aden," the Saudi envoy to Yemen has tweeted, reflecting progress in normalizing the life in the Yemeni southern port city.

"Measures taken to tackle Aden events, and favorable reaction by the Yemeni government and STC, have proved the Saudi-Emirati strong relations and agreement to maintaining the state in Yemen and restoring its security and stability," Mohamed Al Jabir added.

However, observers say, the situation in Aden would not return as it was before clashes, and there would be new arrangements for the future.

The Yemeni President Abd Rabbu Mansour Hadi and his government will not resign, says chairman of Johoud [efforts] Center for Studies in Yemen, despite the recent events, and the coalition will solve the crisis with compromises agreed to by parties in Riyadh, with authorities in the south shared by STC and government.

The STC "has now presence on the ground and a wide public support, and a solution can only be reached through accord with it as a political vessel speaking for southerners," Dr. Abdul Satar al-Shamiri added to the Sputnik International.

"Riyadh dialogues may bring about some points such as sharing the top authority .. and pacts on the federal state's shape based on the National Dialogue outcomes," he predicted.

Political sources have said the meeting called by Riyadh was expected to be held this week in the kingdom.

According to the sources, the Saudi-led coalition "is in constant contacts with Yemeni parties in terms of preparing for the upcoming meeting in KSA to settle disputes and to enhance the internal front against the Houthi militia," the Emirati al-Bayan paper reported on Sunday.

The meeting "will discuss the political, economic and security reforms so as to achieve national partnership between all Yemeni powers engaged in fighting the Iran's militia and devastating project in Yemen," the sources added.

On Wednesday, the Yemeni official government said dialogue with the southern separatists would only be held after the STC's withdrawal from positions its troops seized in Aden.

The Yemeni "government welcomes the Saudi call for a meeting to discuss consequences of the coup in Aden," the official foreign ministry tweeted.

However, it added, the STC should first pull back its forces from positions, as the coalition statement provided for, before any dialogue.

On its part, the STC has expressed readiness to participate in "any type of discussion that would protect gains of the south and guarantee STC's role as a key party to decision-making process."

On August 10, the STC forces seized full control over the Yemeni southern port city of Aden, seat of the official government, following violent clashes with official army that left 40 people killed and 260 others injured, according to UN release.

Saudi Arabia, along with UAE, has been leading a military coalition in Yemen since 26 March 2015, in support of forces loyal to President Abd Rabbu Mansour Hadi to retake northern areas controlled by Houthi (Ansarullah) group.