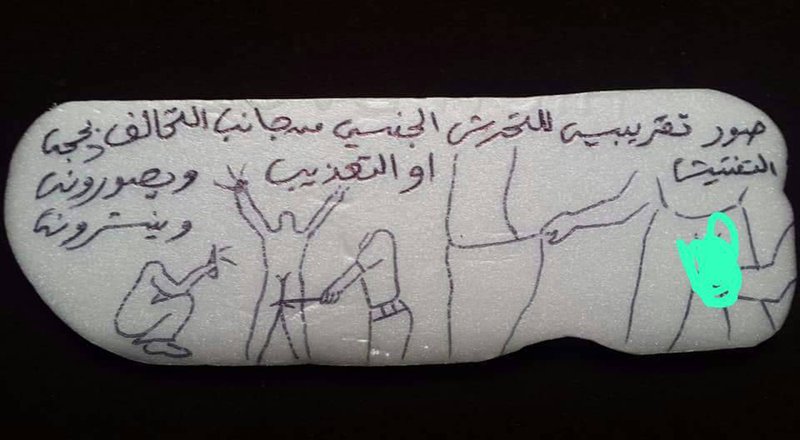 The men screamed and wept. Those who resisted were threatened by barking dogs and beaten until they bled.

Hundreds of detainees suffered similar sexual abuse during the event on March 10 at Beir Ahmed prison in the southern city of Aden, according to seven witnesses interviewed by The Associated Press. Descriptions of the mass abuse offer a window into a world of rampant sexual torture and impunity in UAE-controlled prisons in Yemen. 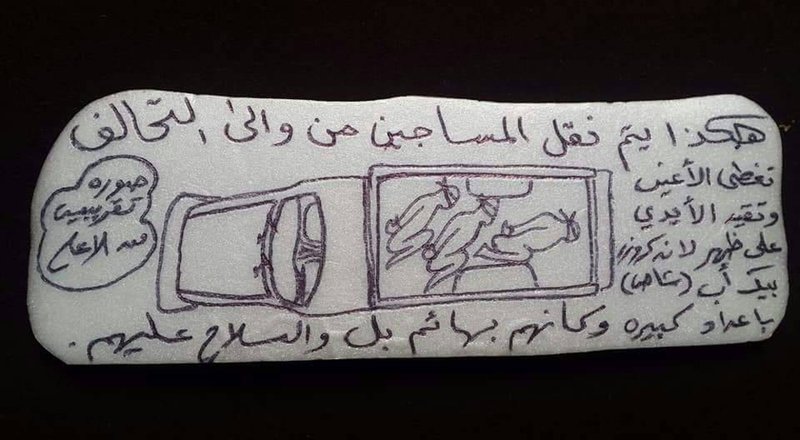 A drawing of prisoners being transported in a pickup truck to an Emirati-run prison in Yemen. The Arabic reads: “This is how they transport the prisoners from and to the coalition. Blindfolded and handcuffed in the back of a Land Cruiser pickup in large numbers as if they are animals and under gunpoint.”

The UAE is a key U.S. ally whose secret prisons and widespread torture were exposed by an AP investigation last June. The AP has since identified at least five prisons where security forces use sexual torture to brutalize and break inmates.

The AP first asked the Pentagon about grave rights abuses committed by the UAE one year ago. But despite well-documented reports of torture reported by the AP, human rights groups and even the United Nations, Marine Maj. Adrian Rankine-Galloway, a Pentagon spokesman, said that the U.S. has seen no evidence of detainee abuse in Yemen.

U.S. officials have acknowledged that American forces receive intelligence from UAE partners and have participated in interrogations in Yemen. But Rankine-Galloway said he could not comment on intelligence sharing with partners. 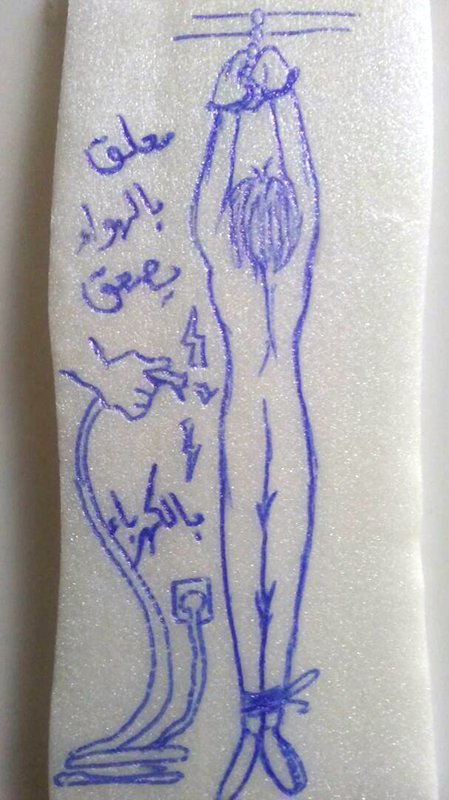 A drawing of a prisoner being abused at a prison in Yemen run by the United Arab Emirates. Arabic from right to left reads: “Anti-terrorism," "Innocent citizen," and “Real terrorism behind their back, they don’t look at.”

"Department of Defense personnel are expected to adhere to the highest standards of personal and professional conduct," he said.

UAE officials did not respond to requests for comment. 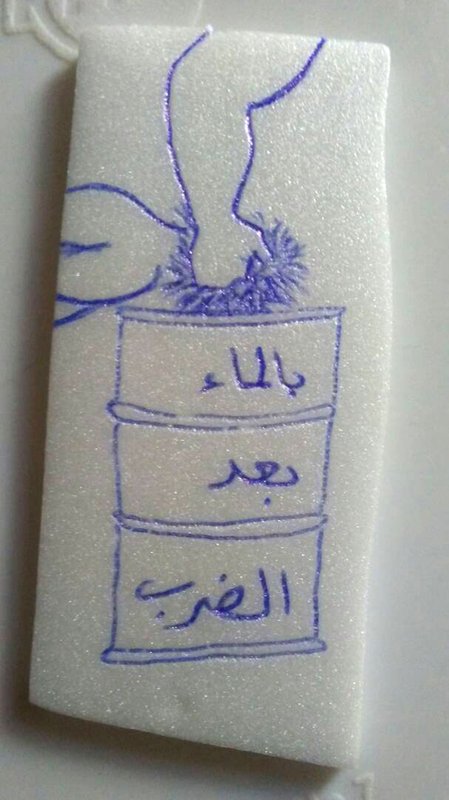 In Yemen's three-year civil war, UAE forces that are purportedly fighting on behalf of Yemen's government have overtaken wide swaths of territory, towns and cities in the south. They have swept up hundreds of men into a network of at least 18 hidden prisons on suspicion of being al-Qaida or Islamic State militants. The prisoners are held without charges or trials.

Witnesses said Yemeni guards working under the direction of Emirati officers have used various methods of sexual torture and humiliation. They raped detainees while other guards filmed the assaults. They electrocuted prisoners' genitals or hung rocks from their testicles. They sexually violated others with wooden and steel poles.

"They strip you naked, then tie your hands to a steel pole from the right and the left so you are spread open in front of them. Then the sodomizing starts," said one father of four.

From inside the prison in Aden, detainees smuggled letters and drawings to the AP about the sexual abuse. The drawings were made on plastic plates with blue ink pen.

The artist told the AP that he was detained last year and has been in three different prisons. "They tortured me without even accusing me of anything. Sometimes I wish they would give me a charge so I can confess and end this pain," he said. "The worst thing about it is that I wish for death every day and I can't find it."

He spoke on condition of anonymity for fear of further abuse.

"Naked after beating," one Arabic caption says. Another drawing shows a man's rectum being forced open.

"This is how they search the prisoners," the caption reads.

Of the five prisons where the AP found sexual torture, four are in Aden, according to three Yemeni security and military officials who spoke to the AP on condition of anonymity for fear of retaliation.

One is at the Buriqa base — the headquarters for the Emirati forces. A second is at the house of Shallal Shaye, the Aden security chief closely allied with the UAE, and a third is at a nightclub-turned-prison called Wadah. The fourth is at Beir Ahmed, where the March atrocities occurred.

U.S. personnel have been seen at the Buriqa base, along with Colombian mercenaries, according to two prisoners and two security officials. The detainees could not say whether the Americans, some of whom wear military uniforms, are members of the U.S. government or mercenaries.

Yemen's war began in 2015, after Iranian-backed Houthi rebels took over much of northern Yemen, including the capital, Sanaa, and forced out the government of Abed Rabbo Mansour Hadi. The Saudi-led coalition, armed and backed by the United States, has sought to bomb the rebels into submission with a relentless air campaign in support of the Hadi government. 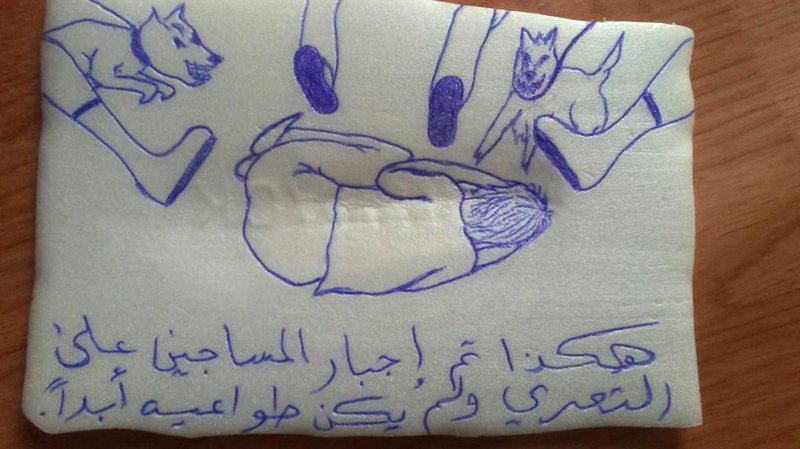 But it is the UAE that has taken the lead in southern Yemen.

The humiliation of the entire prison population in March may have been triggered by a series of hunger strikes among prisoners, who are held for months or years. At least 70 detainees were ordered released earlier this year by state prosecutors but most remain in detention. The Yemeni government has said that it has no control over the UAE-run prisons and Hadi has ordered an investigation into reports of torture.

The incident in March began when soldiers opened cells at 8 a.m., ordered all detainees out to the prison yard, then lined them up and forced them to stand under the sun till noon. When the Emirati force arrived, the detainees were blind-folded, handcuffed and led in groups or individually into a room where the Emiratis were present. The Emiratis told them to undress and lie down. The UAE officers then spread their legs open, touched their genitals and probed their rectums.

"You are killing my dignity," one prisoner was heard crying. A second screamed to the Emiratis, "Did you come to liberate us or strip our clothes off?"

The Emiratis shouted back: "This is our job!"

One prisoner said that when the Emiratis forced them to stand naked, "All I could think of was Abu Ghraib" — referring to the prison outside Baghdad where U.S. soldiers committed abuses against detainees during the Iraq war.

"They were searching for mobile phones inside our bodies," another witness told the AP. "Do you believe this! How could anyone hide a phone in there?"

In the same city, at the UAE-run prison inside the Buriqa military base, two prisoners told the AP they think that American personnel in uniform must be aware of the torture - either because they have heard screams or seen marks of torture." Prisoners said that they haven't seen Americans directly involved in the abuse. 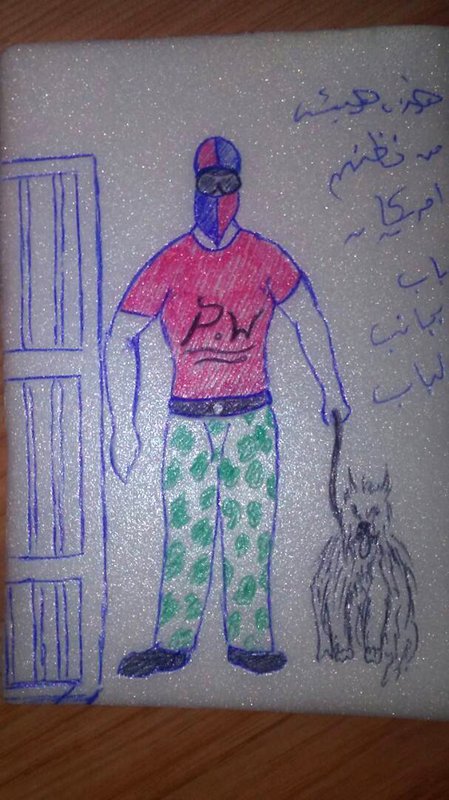 "Americans use Emiratis as gloves to do their dirty work," said one senior security official at the Riyan Prison in the city of Mukalla. He spoke on condition of anonymity because of security concerns.

Two other security officials, who were once close to the Emiratis, said that mercenaries including Americans are present at all the Emirati military camps and sites, including the prisons. Their mission is mainly to guard.

The father of four said that sometimes the screaming from the beatings is so intense that he can feel his cell shake.

"It's beyond imagination," he said.

A former security chief who himself was involved in torturing detainees to extract confessions told the AP that rape is used as a way to force detainees to cooperate with the Emiratis in spying.

"In some cases, they rape the detainee, film him while raping, use it as a way to force him to work for them," he said. He spoke on condition of anonymity, because of security concerns.

Based on the AP investigation last year, the House of Representatives voted on May 24 to require Defense Secretary Jim Mattis to determine whether U.S. military or intelligence personnel violated the law in interrogations of detainees in Yemen. The House adopted the measure as part of the 2019 defense authorization bill. The amendment was sponsored by Rep. Ro Khanna, a Democrat from California. The Defense Department has to submit a report within 120 days to Congress.

"We hope for a clear answer," Khanna said. "This is not the American way of doing business."

The U.S. provides arms worth billions of dollars in addition to logistical and intelligence support to the Saudi-led coalition. The U.S. has also intensified its drone campaign against al-Qaida and the Islamic State group in Yemen. The Pentagon has said that American forces are helping UAE and Yemeni forces in driving al-Qaida militants from southern Yemeni cities.

The war has left over 10,000 people dead, displaced millions, and pushed the already poor country to the edge of famine.

Yet instead of restoring President Hadi's power in the southern Yemen regions liberated from the Houthis, Saudi Arabia kept him in Riyadh for more than a year. He was only allowed to return to Yemen Thursday at the beginning of an offensive led by the UAE to take control of the major port city of Hodeida, the key entry point for humanitarian aid.

The UAE's control over southern Yemen, and the prisons, has left many Yemenis worried that innocent civilians are being pushed into the arms of the very extremists that Emirati forces claim they are fighting. 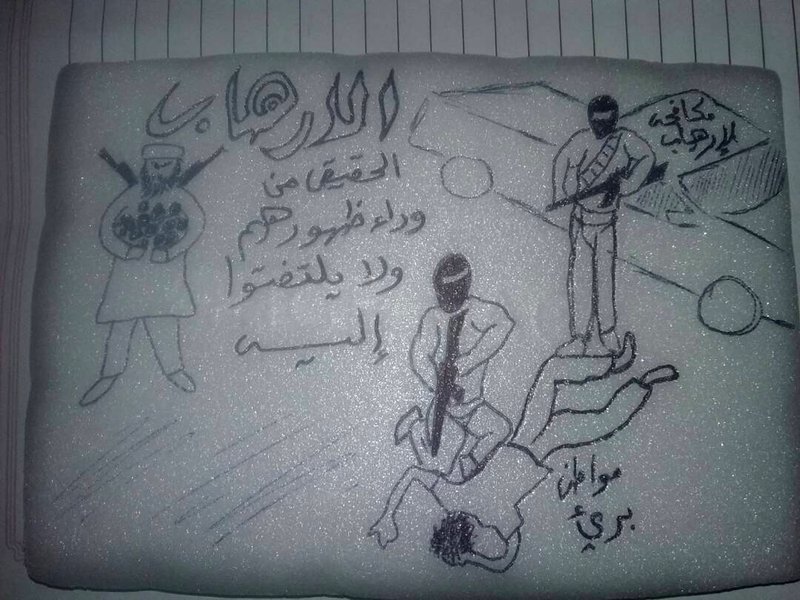 He spoke on condition of anonymity to avoid retaliation from the Emiratis.

One middle-aged man said he has been in prison since 2016, and has been moved across the network of secret prisons multiple times. He said he was interrogated 21 times, during which he was tortured with electricity, beatings, and attack dogs while he was blindfolded and chained.

"They beat me up with electric wires, with steel, an electric shock, or they take off the clothes except for the underwear and stomp on my body and face with their boots. The soldiers would carry you up in the air and dump you on the ground."

The AP previously confirmed 18 detention sites, but he named 21, including 13 prisons and 8 military camps.

Another prisoner gave the AP what he said were the real names of five Emirati torturers. UAE officials did not respond to requests for comment about the men.

One of the most brutal torturers is Yemeni, a former prisoner called Awad al-Wahsh, who was detained and tortured before agreeing to work with the Emiratis, four witnesses told the AP. His supervisor, Yosran al-Maqtari, could not be reached for comment. Al-Maqtari is Aden's chief of anti-terrorism.

Other torturers named by detainees are Emirati officers known to prisoners by their noms de guerre: Abu Udai, Abu Ismail, and Hitler.

The prisoners who were sexually abused in March had tried to fight back. They had organized three hunger strikes to protest their treatment. They had launched a campaign with their families to get human rights groups to secure their release.