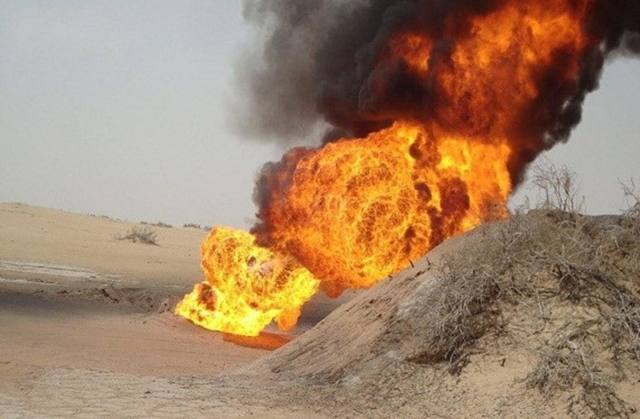 Unknown militants blew up late on Monday an oil pipeline in the Yemeni southeastern governorate of Shabwa.

The pipeline transporting the oil crude from Eiath fields in Jardan district, north of Shabwa, to the oil port of Noshaima in Radhoom district, southeast of the governorate, has been blasted at kilo 22, south of Ataq district the provincial capital of Shabwa, said a local source.

Flames rising at the blast scene were seen from far distance, the source added.

The oil-rich governorate is the scene of repeated attacks on oil pipelines.

On Monday 24 June, unidentified gunmen blew up the same pipeline at kilo 108 in the eastern district of Rawdha.

Two weeks earlier, on 11 June, the pipeline channeling crude from sector S2 in al-Aqla to Eiath was attacked by a sabotage at Radhoom crossroads.

Late in June, the Yemeni internationally-recognized oil minister said his government was "currently carrying out a strategic project" for an oil export pipeline in the Arabian Sea port of Radhoom, as an alternative to the Red Sea Ras Isa oil port in the Houthi-held Hodeida.

The work is underway to lay the 84-km pipeline from Osailan district to the Russian pipeline in Radhoom, Ows al-Owd added then, noting that the new pipeline would enable his ministry to export the oil of Shabwa and Marib governorates.

Shabwa is now under the control of official government, whose troops clashed last August with the Emirati-backed Shabwani Elite forces, as the latter tried to seize Ataq.