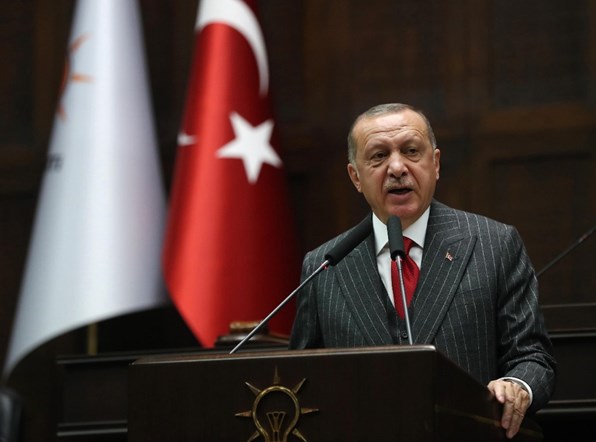 The Yemeni internationally-recognized government on Wednesday criticized statement by the Turkish President on Yemen's 4.5-year war as "provocative".

President Receb Tayyip Erdogan has made "undue" comparison between the 'Peace Spring' and 'Decisive Storm' operations, the government added in a release carried by the Riyadh-based Saba.

By its Peace Spring, Turkey is violating Syria's sovereignty and independence, while the Saudi-led Decisive Storm was launched in response to the Yemeni President Hadi's request to back Yemen in ending the Iranian-backed Houthi coup, it said.

The Saudi-led coalition operations in Yemen have been based on self-defense provided for in the UN Charter, Arab League Charter, Arab joint defense treaty and the UNSC Resolution 2216, the legitimate government claimed.

While condemning that unacceptable statement, Yemen "recalls the stance announced by the Turkish government, at the beginning of events, in support of legitimacy and coalition operations in Yemen," the release read.

On Thursday, the Turkish President said Saudi Arabia had to look in the mirror before criticizing the Turkish army-led operation in Syria.

"Look in the mirror first," Erdogan said. "Who brought Yemen to this state? .. Did tens of thousands of people not die in Yemen?"

Turkey has launched the operation in Syria to combat terrorism and maintain Syria's unity, he claimed.

In response to Saudi criticism over the Turkish operation, the minister for foreign affairs of Turkey has accused the Riyadh-led coalition of killing great deal of Yemenis.

In Yemen, you have killed huge numbers of humans and left others starving, Anadolu Agency quoted FM Mevlut Cavusoglu as addressing Saudis. "Many [of Yemenis] have died out of your blockade."

On Wednesday, the Turkish President Erdogan announced the launch of  operation by his country's army, in cooperation with the Syrian national army.

Saudi Arabia has been leading a military coalition in Yemen since 26 March 2015, in support of forces loyal to President Hadi to retake areas controlled by Houthi group.