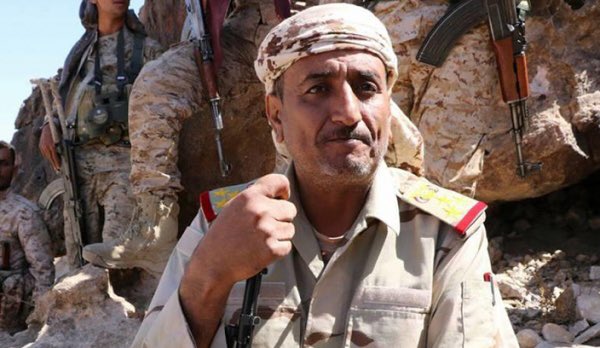 As thousands of people from the governorate of Taiz, southwestern Yemen, were waiting for the presidential committee to announce the results of its investigations into the assassination of the commander of the 35th Armored Brigade Brigadier General Adnan Al-Hammadi, the committee issued, on Tuesday, a surprising decision approving the burial of Al-Hammadi next Friday.

According to local sources, the approval of the Presidential Commission in charge of investigating the case of the assassination of al-Hammadi came after his family submitted a request to allow his burial, after completing the investigations and examining the crime scene and the body.

The corpse of Brigadier Al-Hammadi is scheduled to be transferred next Friday from the Busaheb Hospital in Aden to the Ma’afer District, south of Taiz Governorate.

In a related context, the President of the Southern Transitional Council (STC), Aidarous al-Zubaidi, today, Tuesday, adopted the name of Brigadier Al-Hammadi in the lists of "martyrs of the southern resistance."

The Vice-President of the Transitional Council, Hani bin Brik, said on his Twitter account: "Under the direction of President Al-Zubaidi, the name of the martyr Brigadier General Adnan Al-Hammadi will be adopted in the statements of the martyrs of the southern resistance."

Bin Borik assured that the Al-Hammadi family will be treated within the families of the martyrs, for what the martyr provided in combating the Persian expansion and liberating 80% of the liberated part of Taiz Governorate.

Jalal Al Hammadi is still the first accused of the assassination of his brother, after half a month after the assassination, which caused a sharp division, after accusations of being behind the killing of the leader of the 35th Brigade, between the various factions and parties inside the governorate of Taiz.

The Yemeni journalist and editor-in-chief of the Yemeni newspaper Elaf, Muhammad Al-Khamiri, confirmed on Tuesday, on his Facebook page, that "the first batch of detainees in the case of Brigadier Adnan Al-Hammadi has been released, and only four are under investigation.

With them on how to allow his brother Jalal to enter his weapon and they know the differences between them and that he is confused as his wife said in her investigation. "

Al-Khamiri pointed out that "the rest of the detainees in custody are Jalal, and he admits to killing and justifies this by including old accounts and demands the release of the rest, and his cousins, Mustafa Abdel-Qader, Abdo Mokbel, and Muhammad Mahmoud his cousin and personal guard for him."

Al-Khamiri stressed that "the presidential committee is making great efforts to find out the secrets of the case, and it will submit its report soon."

A  number of Taiz people expressed on Saturday their deep concern to Debrieder about the delay in exposing the circumstances of the Hammadi assassination.

On Saturday, mass demonstrations came out from the directorates of Al-Turba, Al-Ma`afer and Al-Mawaset towards the headquarters of the 35th Armored Brigade, to demand the speedy detection of the assassins of Brigadier Al-Hammadi.

Local sources said that verbal clashes occurred between the presidential commission in charge of the Al Hammadi case and a number of demonstrators, and the committee's guard had to fire to disperse the demonstrators.

The sources confirmed that the Presidential Committee left its headquarters in the Al-Ain district of Al-Ma’afir District, on Saturday evening, under the pretext that it was subjected to pressure and attacks by gunmen.