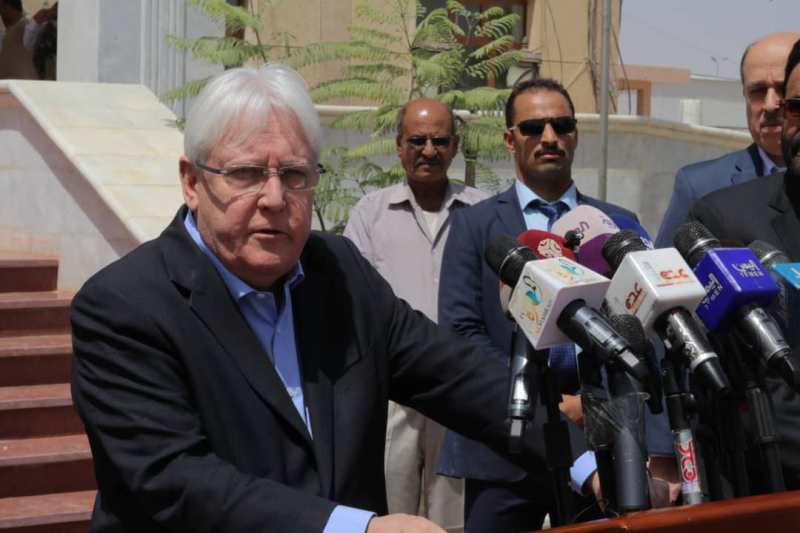 The New Arab (or Al-Araby Al-Jadeed) paper on Sunday shed light on the UN-Yemen envoy's recent visit to the Yemeni northern governorate of Marib.

Envoy Martin Griffiths has called for Marib be kept as a refuge for hundreds of thousands of displaced persons and not turned into a front of conflict.

But, the London-based paper said, the envoy had completely overlooked the Houthi control of al-Jawf and displacement of more than 30,000 people.

Griffiths' remarks suggest that the first goal of his unprecedented visit was to persuade the internationally-recognized government to accept the Houthi seizure over al-Jawf and to not launch a military operation to restore the governorate, in return for sparing Marib any Houthi invasion.

The UN envoy's arrival has coincided with Houthi unprecedented escalation in Khab & al-Sha'af district in order to finalize their control of the whole strategic governorate bordering Saudi Arabia.

The Houthi-appointed foreign undersecretary has given remarks implying the group's refusal of the UN envoy's initiative that the Houthis would not go beyond al-Jawf.

Hussein al-Ezzi's remarks indicate that the group's next goal is to capture oil and gas springs in Safir and to re-operate Marib gas-powered plant and provide the Houthi-held capital of Sana'a with electricity, by heading directly for Safir area, but not for the Marib city that hosts residential gatherings and IDPs camps.

The official government fears that al-Jawf's takeover would give Houthis appetite to overthrow the oil-rich Marib, the legitimate government's key seat where the defense ministry, military academies and largest brigades are stationed.

"A Houthi offensive has already commenced at fringes of Hilan and Sirwah" districts to the west of Marib city, the paper quoted sources as saying.