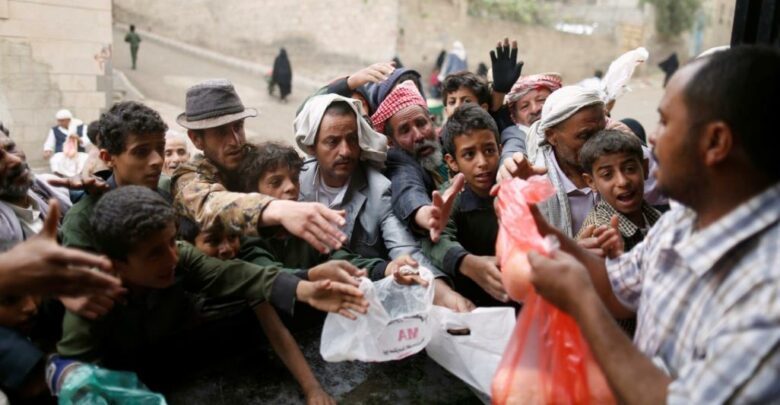 Ansar Allah group (Houthis) is fighting a battle no less fierce than its military battles, but this time with the World Food Program (WFP) in Yemen, with whom it exchanges accusations about spoiling the path of humanitarian aid and exploiting it with opportunism.

Since the beginning of last year, the Houthi group began attacking the World Food Program (WFP), opening files of "corruption", reinforced by the documents ... a sudden attack, which the WFP replaced by waving a paper stopping its relief activities in the areas under Houthi control.

The series of accusations and threats, which lasted for nearly a year and 3 months, was interrupted by intermittent lulls during which intermittent proposals were made between the Houthis and the World Food Program(WFP), but they did not see the light.

The dispute renewed recently, following reports confirming that the food program had stopped its activities in the Houthi regions, which caused the latter to issue fiery statements against the program.

Head of the Planning Department of the Houthi High Coordination Council for Humanitarian Affairs, Mutahar Zaid, said Tuesday evening that the decision of the international organizations to reduce aid by more than 75% at a sensitive stage "reflects the reality of the role of these organizations."

The Houthi-run Al-Masirah, quoted Zayd as saying: “Most of the projects of the international organizations’ projects go as operating expenses.

Zaid stressed that, under the umbrella of aid, international organizations benefit and offer crumbs to the Yemeni people.

Debriefer has learned from private sources in the World Food Program (WFP) in Yemen that the program will not continue to disburse aid in the Houthi-controlled areas, starting in April.

The group's prominent leader, Mohammed Ali al-Houthi, had threatened, late on Monday, the World Food Program, to reveal the proceedings of the meetings held with his officials and broadcast their videos, in the event that the delivery of aid was not started in cash.

Al-Houthi tweeted: "If the food program does not start the implementation of the experimental stage for the delivery of the cash (approved) and justified with flawed excuses, then the videos for these excuses may be downloaded and we show their agreement to the terms and the fact that the problems they hinder the implementation of the experimental stage of the cash It out. "

He added, "The program officials in Yemen were briefed on the videos."

The Houthi group announced on March 5, through the Secretary-General of the Supreme Council for the Administration and Coordination of Humanitarian Affairs, Abdulmohsen Tawoos, that "an agreement has been reached with the World Food Program (WFP) to receive aid in cash so that the citizen can buy whatever food he wants."

On February 23, the World Food Program announced that it had made progress with the Houthis to begin the biometric registration process in the capital, Sanaa, in preparation for the resumption of aid distribution.

The program said in a press statement at the time that "the start of the biometric registration process (fingerprint system) will be followed by the distribution of cash assistance in three directorates in the capital's secretariat."

However, he pointed out, "The failure to reach a final agreement on some of the conditions put forward by the Supreme Council for the Administration and Coordination of Humanitarian Affairs," stressing that "the pilot phase can only be launched after these outstanding issues are resolved."