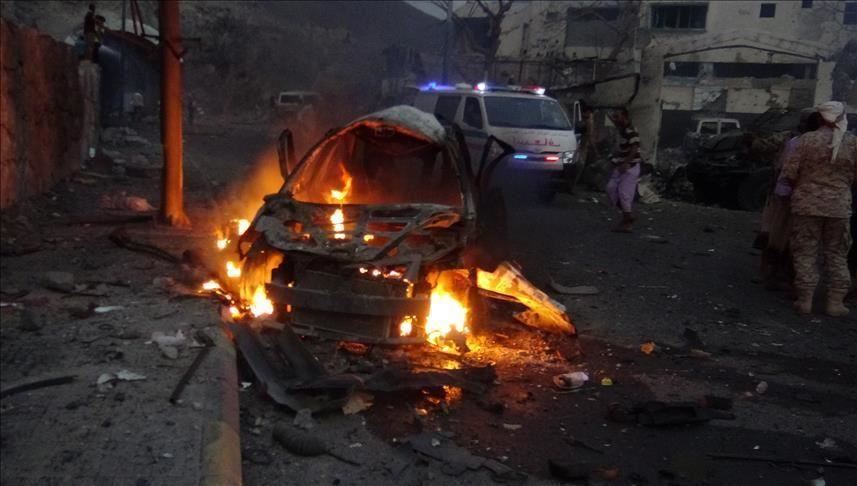 Local authorities in the Yemeni eastern governorate of Hadhramout on Friday announced the formation of a committee to investigate in the killing of a security officer and 4 bodyguards in explosive device last Tuesday.
The announcement comes hours after Yafea tribes in Hadhramout had threatened to escalate unless local security and military authorities identify the assassins of fellow tribesmen within 4 days.
On Tuesday, Shibam security commander, Saleh Ali Jabir, and four bodyguards were killed in an explosive device blast.
On 24 March, Shibam security commander filed a complaint to local authorities against officers affiliated to the sixth military region, said media reports.
He accused the officers of threatening to kill him, after he had sought to close a qat market in the district, the reports added.
Having established under a decree issued by Hadhramout deputy governor, the fact-finding panel is tasked with "investigating the assassination of Shibam security commander and his bodyguards, and examining the previous evidences along with actions taken following the reports filed by the martyr [Jabir] to security authorities."
Killing the security commander of Shibam is a "terrorist act that won't pass without punishment," the Yemeni President Abd Rabbu Mansour Hadi said Thursday.
On phone call, President Hadi assured Sheikh Abdullah Bin Ali Jabir that "subversive and terrorism elements must be annihilated, along with supporters," according to the Riyadh-based Saba.
Hadi instructed Hadhramout executive and security authorities to cooperate with their fellows in Valley and Desert districts, and act in team spirit to enhance security and stability across the governorate.