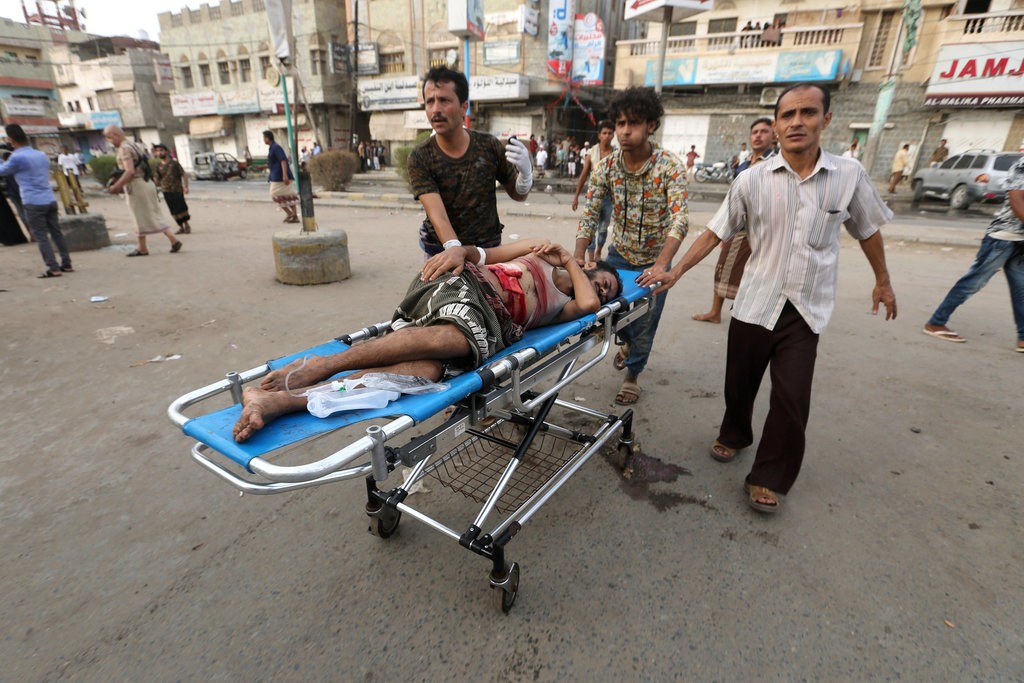 Warplanes of the Saudi-led coalition fired more than two dozen missiles into this rebel-held Yemeni port city on Thursday, hitting the fish market, the entrance to the main hospital and a security compound in an attack that killed at least 30 people, medical workers said.

The missile strikes, which were an escalation of the conflict, came after a week of tensions in which Saudi Arabia accused its Yemeni adversaries, the Houthi rebels who occupy Al Hudaydah, of attacking a Saudi oil vessel in a Red Sea shipping lane.

At the same time, aid agencies sharpened criticism of the Saudi coalition over civilian suffering in the city, which the coalition has been threatening to invade for months.

Hours after the missile strikes, the United Nations special representative for Yemen briefed the Security Council in New York about a possible renewal of peace talks in the country, which the United Nations has declared the scene of the world’s worst humanitarian disaster.

Yemeni political factions and militias have been fighting for control of Yemen, the Arab world’s poorest country, since power-sharing talks collapsed in 2015 and the Houthis ousted the internationally backed government of President Abdu Rabbu Mansour Hadi.

Since then, fighting has devolved into proxy warfare, with Saudi Arabia and the United Arab Emirates arming and fighting alongside a disparate group of Islamist, tribal and regional militias against the Houthis, who control Sana, the capital, as well as Al Hudaydah and their ancestral territories along the Saudi border.

The Saudis and their allies have accused Iran of aiding the Houthis. Iran has denounced the Saudi-led coalition for the loss of life and destruction in Yemen but denies it is arming the Houthis, despite evidence that the rebels are using Iranian weaponry including missiles.

In June, the Saudi and Emirati governments launched the battle for control of Al Hudaydah in an effort to tip the balance of power against the Houthis. The Saudi-led coalition ignored a resounding diplomatic outcry over concern for the safety of the city’s 600,000 residents and the possibility that the fighting could disrupt supply lines for urgent humanitarian assistance to millions of others in Yemen.

Aid arriving in the Red Sea port accounts for about 70 percent of imports in Yemen, a country where two-thirds of the 29 million people rely on international aid.

Less than a month later, the coalition halted the Al Hudaydah ground assault as it faced the hard realities of urban warfare and little progress. Instead the Saudis and Emiratis said they would support United Nations efforts to find a political solution, as well as a possible formula for a wider cease-fire.

Martin Griffiths, the United Nations special envoy, offered a grim progress report to Security Council members. “Recently, and despite all our efforts, the pace of war has increased,” he said, with Al Hudaydah becoming the “center of gravity” for the conflict.

Since the assault on Al Hudaydah started, more than 330,000 people, approximately half the city’s inhabitants, have fled, according to the United Nations.

Mr. Griffiths said he planned to invite the warring sides to Geneva on Sept. 6 for a first round of consultations aimed at convening peace talks. The plan is to “discuss a framework of negotiations and specific plans for moving the process forward,” he said.

On Thursday afternoon, however, the Arab coalition’s aerial forces were pounding several neighborhoods of Al Hudaydah, according to residents and aid workers.

Shortly after 4 p.m., bombs hit the city’s crowded fish market, about 200 yards from Al Thawrah Public Hospital. Medics rushed to the scene trying to save lives, but then about 30 minutes later another strike rocked the street in front of the hospital, where the wounded had been transported from the market.

By nightfall, medics reported that at least 30 people had been killed and that dozens were in critical condition. Sanitation workers tried to clean the targeted areas of blood and body parts.

Missiles also struck security facilities controlled by the Houthis, which like the fish market is a few hundred yards from the hospital.

The missile strikes on Thursday were the most intense in a series of Saudi-led aerial attacks over the past week. Earlier attacks hit targets near a reproductive health center and a public laboratory in Al Hudaydah, and a water station and sanitation plant that supplies much of the water to the port city, according to United Nations relief agencies.

“For weeks, we’ve been doing everything possible to help hundreds of thousands of people living in and near Hudaydah,” Lise Grande, the United Nations humanitarian coordinator for Yemen, said in a statement. “These airstrikes are putting innocent civilians at extreme risk.”

Save the Children, which runs a diphtheria clinic at Al Thawrah Public Hospital, the largest government hospital in the city, criticized the targeting of heavily populated civilian areas.

“We’re seriously concerned that the area is simply not safe for civilians and that people seeking help at the hospital may not be safe,” said Tamer Kirolos, the aid agency’s country director.