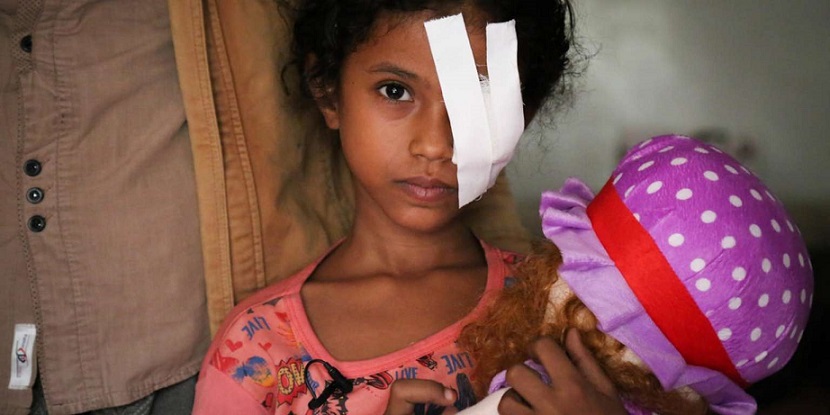 A majority of the British public want their Government to call for a ceasefire in Yemen as a fresh wave of violence in the port city of Hodeidah has seen bombings escalate and deadly clashes erupt south of Hodeidah City, putting the lives of thousands of children in extreme danger, warns Save the Children.

Even before the latest increase in violence, an average of 6,238 people – half of whom are children – were fleeing Hodeidah Governorate every single day.

In little more than 50 days (June 1st to July 24th) the constant threat of bombing, shelling, starvation and a lack of basic services displaced a total of 330,610 people from Hodeidah Governorate according to the United Nations.

A Save the Children/YouGov survey suggests that 51 per cent of the British public want their Government to call for a ceasefire in Yemen. Britain is a major arms exporter to the Saudi- and Emirati-led Coalition fighting in Yemen but 61 per cent of those surveyed either tend to oppose (27 per cent) or strongly oppose (34 per cent) the transfer of British-made weapons to Saudi Arabia and/or the United Arab Emirates. When asked whether Britain should continue to supply weapons to the Coalition more than half of respondents said they want the Government to either completely suspend (47 per cent) or reduce (9 per cent) arms sales to any party involved in the conflict in Yemen.

The journey for those trying to flee Hodeidah isn’t safe, with families having to brave minefields, airstrikes and forced to cross areas of active fighting all in a bid to escape the embattled governorate. Civilian casualties in the most impacted districts more than doubled in the start of July as the fighting moved to more populated areas, according to the UN’s Refugee Agency.

Eight-year-old Razan* was severely wounded in one eye after a bomb exploded nearby as she and her father tried to leave. She was in agony for days and her family feared she was permanently blinded.

“When Razan was injured, the airstrike was just metres away from us. The airstrike hit an armoured vehicle nearby and flying shrapnel hit Razan in the eye. I tried to get us to a safe place to have a look at her eye, and then I bandaged her up with my shawl. Then we had to carry on moving.”

“Razan had to go five days without treatment, because I didn’t have enough money. After five days I asked Razan whether she could still see through her injured eye. She lied and said yes. We went upstairs, and I asked her to count the birds outside, while I covered her good eye. She said there were two, but there were four.”

Razan eventually reached a specialist hospital, where Save the Children referred her for emergency surgery that should restore her eyesight, but there are many more children like her who are not getting the care they need.

Even if they make it out, the villages and communities where they escape to are overwhelmed and simply can’t cope with the influx of people or provide them with essential services. This is putting the whole country at risk, leaving the most vulnerable living in crowded conditions and struggling to find enough food, water or medicine to survive. This could lead to extreme food insecurity or an outbreak of cholera, measles or diphtheria, diseases that have already taken hold in Yemen and disproportionately affect weak and/or malnourished children – leaving an already weakened health system on the verge of collapse. Just last week Save the Children warned of devastating humanitarian consequences should Hodeidah City be besieged.

Save the Children’s Yemen Country Director, Tamer Kirolos, has just returned from Hodeidah. He described what he saw there:

“Since I was last here just two months ago, Hodeidah City has become somewhat of a ghost town. The streets are empty even in the day and there are checkpoints everywhere. The devastation that airstrikes and shelling have caused is clear to see.”

“Hodeidah was already the poorest governorate in Yemen – the poorest country in the Middle East – before this latest offensive and it simply can’t handle another blow. People fear they will die whether they stay or leave but even if they manage to get out their lives remain in danger. With the economy in tatters and health and sanitation facilities throughout the country destroyed, conditions are now rampant for disease and starvation to spread. Aid agencies are doing what they can to keep people alive but ultimately, our efforts are just a sticking plaster on a gaping wound.”

“We must see an immediate ceasefire to avoid any more civilian casualties and we call on all parties to continue to negotiate with the UN Special Envoy Martin Griffiths in good faith, to achieve a workable peace deal that will bring an end to this brutal war and to the suffering of 22 million people in Yemen.”