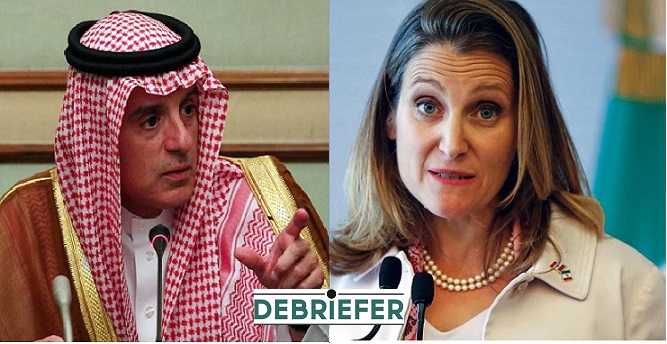 Canada took on a courageous position through its foreign minister and embassy in Riyadh when it expressed its concern regarding the Saudi authorities’ arrest of human rights activists, including women and called for their release. These human rights activists are only guilty of bravely expressing their opinions and defending the rights of the oppressed citizens in the Kingdom of fear. The Canadian position is not new, as several international human rights organisations and the American State Department criticised the human rights situation in Saudi Arabia, especially regarding the freedom of expression, freedom of religion and beliefs, women’s rights, the situation of expatriates and the lack of criminal justice. In recent years, these reports added to the crimes committed by the Saudi-led coalition air force in Yemen.

The new situation that coincided with the Canadian position is Saudi Arabia’s angry and unbalanced reaction. Saudi Arabia reacted by dismissing the Canadian ambassador from Riyadh, recalling the Saudi ambassador from Ottawa, freezing investment transactions between the two countries, ending scholarships for Saudi students in Canada, and stopping all Saudi Airline trips to Canadian cities. On the other hand, Canada’s reaction was diplomatic and graceful, as its foreign minister announced that she is “very comfortable” with Canada’s position and that “Canada will always stand up for human rights in Canada and around the world — and women’s rights are human rights.” This is stipulated by the Canadian Charter of Rights and Freedoms, which is a bill of rights included in the Constitution. It is even considered higher than the Canadian Constitution because it cannot be amended or modified, and it includes general principles, such as the defence of fundamental rights that everyone everywhere shares.

The irony in the Saudi reaction is that the tweet by the Canadian embassy in Riyadh which triggered the crisis between Saudi Arabia and Canada, only expressed its alarm at the arrest of a Saudi activist, Samar Badawi, and called for her release. This was met with the unexpected and aggressive Saudi reaction.

However, earlier this year, the US State Department’s annual Country Reports on Human Rights Practices was issued and it included an entire chapter on Saudi Arabia, criticising the human rights situation in the country. It also revealed the human rights abuses committed by its authorities against activists and members of the ruling family. The report also mentioned that the Saudi authorities arbitrarily arrested political opponents and religious leaders and that even prominent members of the ruling family, as well as prominent businessmen, were not spared. According to the State Department report, all of these arrests were extrajudicial and none of the detainees were given trials. As for the princes and businessmen who were released, settlements were negotiated with them. Furthermore, the American report did not only criticise the human rights situation inside Saudi Arabia, but also dedicated a section to criticise the Saudi war in Yemen and its violation of the rights of civilians there. Despite all these criticisms documented in an official report, Riyadh did not react to Washington, and the new Saudi rulers went on to conclude the “Deal of the Century” according to which US President Donald Trump was given over $450 billion, which he considered to be the price for his protection of the Saudi government.

Ironically, Canada has investment interests with Saudi Arabia, and the value of trade between the two countries is about $3 billion. It is in Canada’s interests to continue such trade, as it considered Saudi Arabia its second economic partner in the Middle East. Since the arrival of Justin Trudeau as prime minister, Canada has suspended the completion of a $12 billion arms sale to Saudi Arabia since 2014, made under his predecessor, due to pressure from Canadian human rights organisations. This prompted Trudeau to commit to refraining from making any deal with similar countries in the future. Observers expect this crisis to be the appropriate time for the young Canadian prime minister to get rid of the burden of this deal, which was in fact no more than an attempt to buy Canada’s silence with regards to the defence of human rights at the global level. Canada may follow the example of Germany, which suspended all its arms sales to Saudi Arabia earlier this year. Before this, Norway and Sweden cancelled all of their arms deals with Saudi Arabia with the stroke of a pen! In Belgium, the Supreme Court issued a decree in July banning arms exports to Saudi Arabia because of the human rights conditions in the country.

This crisis has exposed two faces of hypocrisy, the hypocrisy of the Saudi authorities, which are silent when criticism comes from the American authorities which issues insulting statements, and sometimes even direct or implicit accusations of supporting terrorism by President Trump. The other face is the Western hypocrisy, which has been demonstrated by several countries, foremost among them America, Britain and France, considered the cradle of the Universal Declaration of Human Rights, when they are silent in the face of Saudi Arabia’s human rights violations, not only inside the country, but also in Yemen, carried out with weapons purchased from these Western countries.

Perhaps the most important aspect of this new crisis between Saudi Arabia and Canada, which we do not know when and how it will end, is that it reminded the world of the abhorrent human rights situation in Saudi Arabia and of the abuses taking place within the Kingdom of fear, given the absence of a constitution or laws guaranteeing rights and protecting individuals, as well as providing them with a fair trial.

The Saudi-Canadian crisis has broken the taboo that most Western countries are too afraid to approach and therefore avoids addressing Saudi Arabia’s human rights record, as a means to preserve its economic interests and military deals. Will Canada’s boldness break the West’s silence about abuses in the Kingdom of fear? The answer to this question is left for the upcoming days.