No, the Saudis Aren’t ‘Defending Themselves’ 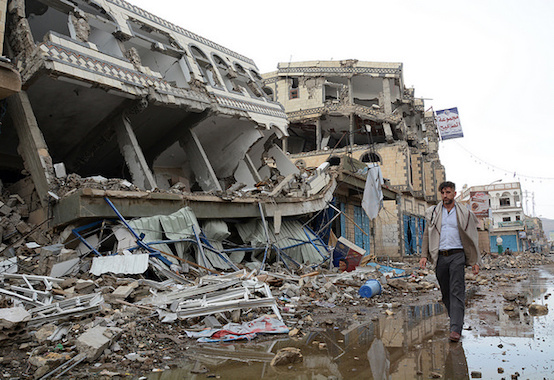 Paul Pillar capably sums up why supporting the war on Yemen is not in America’s interest:

Neither does the administration’s policy toward the Yemeni war accord with a realist perspective of where U.S. interests in the area do and do not lie. The United States does not have a stake in the outcome of civil warfare in Yemen. The Houthi rebellion is rooted in very local issues involving what the Houthis contend has been insufficient central government attention to the interests of tribal elements in the north of the country. Nor do the Houthis pose more than a trivial threat to anyone else in the region [bold mine-DL]. Although the Trump administration and Saudi Arabia have made a big deal about missiles that the Houthis have fired at Saudi Arabia, those firings are pinpricks compared to the aerial assault in the other direction for which the missiles have been an attempt at retaliation. Missiles would not be launched if the Saudis and Emiratis had never launched their destructive expedition.

Insofar as the U.S. has any interests in Yemen, they have been harmed by the coalition’s war. The coalition has not only struck bargains with and recruited members of Al Qaeda in the Arabian Peninsula (AQAP), but the chaos that their intervention has sown has benefited AQAP greatly. The U.S. has been backing a Saudi and Emirati policy that increases the threat from AQAP, and it has done so knowingly for several years. These governments are not our “allies,” and their reckless policy is making the U.S. and our genuine allies less secure.

One of the more irritating and dishonest defenses of U.S. support for the war is the claim that the Saudis and Emiratis are “defending” themselves and the U.S. is merely assisting with that “self-defense.” The record shows that the Saudis and Emiratis are the international aggressors here, and there would be no serious threat to Saudi Arabia and the UAE if they had not been bombing, invading, and starving Yemen since 2015. The coalition hides behind the fig leaf that they are trying to restore the discredited former president, but Hadi has no support inside Yemen and the UAE long since moved on to support other proxies as they try to carve out a sphere of influence for themselves. External intervention in Yemen’s conflict has not only prolonged and intensified the war, but it has also devastated the civilian population, created the world’s worst humanitarian crisis, and exacerbated the country’s existing political divisions. The Saudi coalition’s war is unnecessary, unjustified, and has created enormous evils that will plague Yemen and the region for a long time to come. The war is indefensible, and so is U.S. support for it.