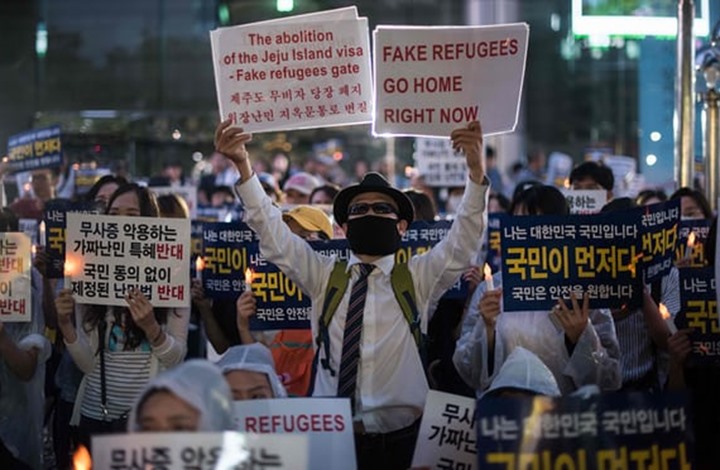 Every year, millions of people travel to beautiful Jeju Island, a popular tourist spot off the southern coast of South Korea. Among this year’s visitors were several hundred people from Yemen, including some children.

But these Yemenis were unlike most who arrive at this picturesque island, for they had come seeking sanctuary, rather than sunshine.

For them, Jeju Island was sanctuary from a war at home in Yemen that has seen more than 16,000 civilians killed and injured, 2 million people forced to flee their homes, 3.4 million children out of school and 22.2 million people (75% of the population) in need of life-saving humanitarian aid.

Between January and May 2018, approximately 550 Yemenis seeking safety arrived in Jeju Island via Malaysia, which unlike South Korea does not have laws to regulate refugees. Asylum seekers in Malaysia may be subject to detention, prosecution, whipping and deportation as result. Yemenis arrived in South Korea taking advantage of a 30-day visa-free entry aimed at attracting tourists. Once they landed on Korean soil, they sought temporary visas while waiting for their asylum claims to be decided.

The threats compelling these people to flee their homes are real and ongoing. Millions of Yemeni civilians are caught in the middle of an “entirely man-made catastrophe”

Since arriving, however, the Yemenis have experienced mostly hostility than hospitality. In July 2018, more than 714,000 people in South Korea signed a petition urging President Moon Jae-in reject their applications for asylum, alleging that they were “fake refugees” only seeking to take advantage of South Korea’s economic stability. This is the largest petition the President has received since taking office in 2017.

After their arrival, South Korean social media was hit by a blast of baseless allegations that multiple women in Jeju Island were killed by Yemenis. Against this backdrop, protests in Jeju Island and Seoul were held. Among the protesters were some women’s rights organizations, warning that the rapid influx of foreign nationals with different cultural backgrounds would harm public safety.

South Korea is not a common destination for asylum seekers. Although South Korea signed the Refugee Convention, it accepts only a handful of people seeking asylum annually, either by recognizing them as refugees or by granting permission to remain on humanitarian grounds. According to NANCEN, a South Korean refugee rights NGO, 1.5% of nearly 10,000 applications for refugee status were granted by South Korea in 2017. This lack of familiarity with welcoming refugees may be part of why so many Koreans are wary of accepting these 550 Yemenis.

The threats compelling these people to flee their homes are real and ongoing. Millions of Yemeni civilians are caught in the middle of an “entirely man-made catastrophe” worsened by widespread violations and abuses of international human rights and humanitarian law. Parties to the conflict regularly restrict aid delivery and have repeatedly attacked or damaged civilian infrastructure, including schools and hospitals. The Saudi-Arabia-led coalition has carried out dozens of indiscriminate and disproportionate airstrikes on civilians and civilian infrastructure, hitting homes, schools, markets, weddings, hospitals and mosques. Many of these attacks likely amount to war crimes.

Prompt processing of refugee claims is needed, but the proceedings must also be fair and guarantee individuals the right to appeal their assessment with the assistance of legal representation. The government has an obligation to give each case the review it requires, without rushing the process because of public pressure.

Welcoming people who have been forced to flee their homes is not about providing charity to non-citizens. It is about living up to our responsibilities to fellow human beings. South Korea’s leaders, as well as its people must consider what kind of society we all want to create for ourselves and our children to live in. We all have a stake in making the world a safer place, and that includes hosting people who cannot go home and giving them a place where they can be safe from danger.

President Moon is now required to respond to the petition calling for him to reject the Yemeni asylum claims. As a presidential candidate in 2017, Moon expressed willingness to abide by the Refugee Convention and grant protection to those in need. Now it is time for him to show leadership and live up to that promise by committing to process the asylum claims fairly and promptly and to grant protection to those deemed to be refugees.