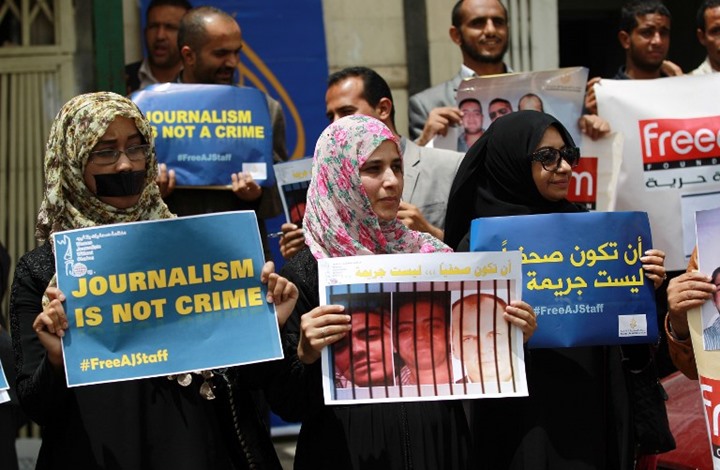 In its report released late last month, the U.N. Human Rights Council found that all groups involved in the Yemen conflict--from the government-controlled south, with its militias propped up by the UAE-led coalition and loyal to the secessionist Southern Transitional Council, and areas held by the rebel Ansar Allah or Houthi movement--were responsible for widespread human rights abuses.

The report's findings reflect what journalists still working in the war-torn region have told CPJ--that there is no safe place and they remain under deadly pressure from all sides. Since the start of fighting in 2014, CPJ has documented kidnaps, attacks, arson, judicial cases, and killings. As independent journalist Sami al-Kaf told CPJ, "Threats can come from all sides, without exception."

Journalists critical of the Houthis said they cannot operate safely in areas under their control, but CPJ has found that those reporting in Aden and other areas of the south that were once considered relatively safe are also being attacked and harassed by militias backed by the UAE coalition, such as the Security Belt and the Hadrami Elite Forces. These groups put pressure on the media to not criticize the UAE or other countries supporting the Yemeni government, or report on issues that implicate the militias.

The result, several Yemeni journalists told CPJ, is that they are forced to self-censor for their own safety.

Incidents involving forces under Yemeni or UAE-backed proxy rule, like the abduction that CPJ documented earlier this year of seven Akhbar al-Youm staff, whom Security Belt forces held for a month, are not isolated. Fathi bin Lazraq, editor-in-chief of the newspaper Aden al-Ghad, told CPJ the Emergency Battalion in Aden detained him for eight hours on July 1. Lazraq said that the battalion operates under the umbrella of the Security Belt forces.

Lazraq said the group repeatedly beat him, and its commander, Samad Sunah, told him that he was being held because his paper reported allegations that militias had seized land in the Ummul Island area of Aden and denied residents entry to the area.

In a separate case that CPJ first documented in February, the UAE-funded Hadrami Elite Forces detained Awad Kashmeem, former governor of the board of directors for the government-aligned newspaper November 30, for nearly a month. Kashmeem told CPJ on August 21 that Hadramout's Specialized Criminal Court charged him with "incitement" and "spreading false news" and that "militias answering to the UAE" forbade him from writing and imposed travel restrictions.

Hadramout Governor Faraj al-Bahasni, the commander of the Elite Forces whom Kashmeem says ordered his detention, did not reply to CPJ's email requesting comment.

Others journalists described being put under direct pressure to toe the official line or risk having their outlets closed. After an attack against the Akhbar al-Youm printing press that CPJ documented in March, the non-profit organization Shomou Foundation, which runs the paper, was forced to relocate to Ma'rib Governorate, Saif al-Haderi, the foundation's president, told CPJ. He added that the staff who were abducted by Security Belt Forces, were released on condition that they stop working with Akhbar al-Youm or the foundation.

Despite relocating, the paper continues to come under pressure over its criticism of Yemeni government policies, and the UAE. Al-Haderi told CPJ that the journalism secretary for Ma'rib Governorate, Ali al-Ghelisi, called him and threatened to shut down the newspaper if it printed anything critical of the Saudi-led coalition, particularly the UAE.

Al-Ghelisi did not respond to an email from CPJ requesting comment.

"Until this moment, there is still pressure to close the foundation in Ma'rib governorate," al-Haderi said, "[Despite that] we are the first newspaper to be issued from Ma'rib, which is a big gain for the governorate."

Al-Haderi said that the paper's journalists continue to receive direct threats to their physical safety. "Any journalist who criticizes the practices of the UAE in Yemen is threatened, arrested, and possibly killed," al-Haderi said.

Other news outlets have faced different forms of censorship, with the same end result. Saeed Thabit Saeed, country director for Al-Jazeera's Yemen operations, told CPJ on August 27 that the Yemeni Government extended an existing ban on the channel in Taiz to apply to all government-controlled areas. The channel is also barred from broadcasting in Houthi-controlled of Yemen. Saeed said that the channel applied for a permit renewal in December 2017 but in January learned that the permit was denied.

Saudi Arabia, the UAE, Bahrain, Egypt, and Jordan have all blocked Al-Jazeera or shuttered its bureaus as part of a broader diplomatic standoff that erupted last year with Qatar, which funds the channel. In the wake of the standoff, Qatar troops were withdrawn from the coalition, Reuters reported.

Other outlets in government-controlled areas reported similar pressure. Ahmad al-Zurqa, director of the independent Yemeni satellite TV channel Belqees, told CPJ that the outlet ceased covering the western coastal region of Yemen, between the port cities of Mokha and Hodeida, after the channel received threats from Security Belt leadership whom, he said, answered directly to the UAE. The latter city is under Houthi control and the entire area is a principal theater for coalition military efforts against the rebel group.

Al-Zurqa added that the coalition and militias under its umbrella threatened retaliation against the channel if it hosted independent journalists critical of coalition activities. According to a statement from the channel that Al-Zurqa forwarded to CPJ, Security Belt forces on July 31 ordered a privately owned studio that Belqees uses to film its show, to ban the independent journalist Sami al-Kaf from appearing.

Al-Kaf, who has written for a number of publications and is editor-in-chief of the independent news website al-Mala'ab, told CPJ that he suspects the ban is related to appearances he made on Belqees program "Yemeni Evening" in which he criticized the Security Belt and other militias, as well as the Yemeni government and the Southern Transitional Council for continued insecurity and fighting in Aden. In another appearance, he accused the Southern Transitional Council and its allied militias of "staging a coup" against the Yemeni government.

Al-Kaf said colleagues have warned him he could be abducted or arrested for his opposition to the security forces in Aden. He added that the Yemeni government had not investigated the threats, and that his colleagues advised him to leave the country for his own safety.

Despite the risks and threats, Al-Kaf continues to report from the southern Yemen, as do many other journalists. But as UAE proxies consolidate control in the region, their attacks against press freedom cast a steadily lengthening shadow over independent reporting.

"Any channel opposing the coalition or the Emirates is banned from the areas where they have influence," al-Zurqa told CPJ.

*Justin Shilad is a Middle East and North Africa Research Associate at the Committee to Protect Journalists.