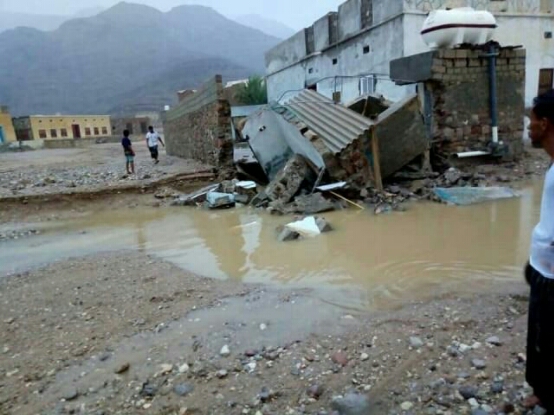 One billion US dollars is the initial public loss resulted by the tropical storm (Luban) that hit Mahara Governorate, to the east of Yemen, last October, according to a report prepared by an official committee.

The report, which was discussed on Thursday in Aden by the internationally recognized Yemeni government chaired by Prime Minister Dr. Moein Abdulmalik, stated that reconstruction and repairing the damages caused by the Luban would cost one billion US dollars.

However, according to the official report, damages in private properties; houses, stores, cars, farms, etc., have yet to be estimated.

The storm left 8 dead, 9 lost and 124 injured and damaged a large deal of roads and bridges in some valleys, the national grid, pipelines of public water system and water wells, according to the report that addressed the humanitarian situation in post-Luban Mahara.

"Floods resulted from Luban shoveled away some public buildings and private farms, livestock, cars and houses, said he report.

In their report, the committee recommended that an implementing unit to be established in Ghaidha City, Mahara provincial capital, to be tasked with addressing Luban resultant damages and to act in coordination with local authorities and according to prudent governance.

A decree should be issued to prohibit the provision of housing lands and the haphazard construction in valleys.

Late last October, the newly appointed Prime Minister announced during his visit to the affected governorate bordering Oman that his government allocated two billion Yemeni rials (about US$ 2.55 million) for the local authorities to immediately respond to the Luban Storm's aftermaths and damages.

At a press conference held then in Mahara, Dr. Abdulmalik said that funds would be mainly allotted for repairing public utilities, and that his government was acting to restore basic services.