"The Suffering Of Civilians In Yemen Is But A crime": The Guardian 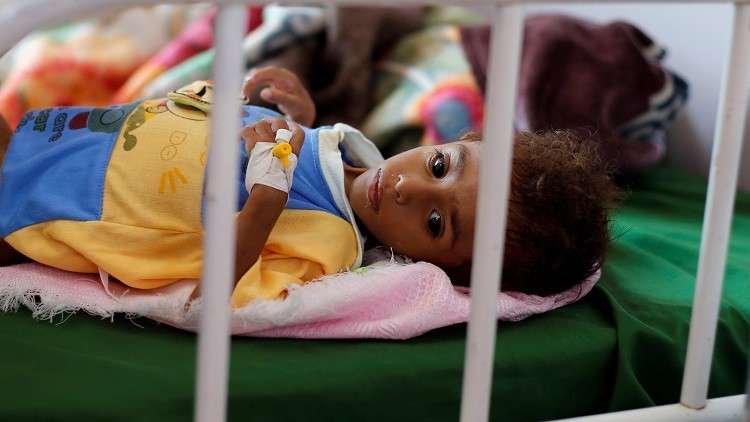 The Guardian's editorial said the west could not continue regardless of what was happening there.The country has become a “chaos state”.

Half of Yemen's 22 million people are on the brink of starvation, with 1.8 million children suffering from severe malnutrition, the newspaper said.

The United Nations had warned of famine in the country before the outbreak of the war, almost four years ago, and Yemen was importing almost all its food, and the situation has deteriorated since then unimaginable.

The newspaper said: "The World Health Organization (WHO) warned last month that there were about 10,000 cholera cases per week in Yemen, but some estimate the real figure to be five times that figure."

It noted that the conflict began in Yemen when the Saudi-led coalition launched a confrontation with the Houthis who overthrew the internationally recognized Yemeni president, which has led to the escalation of the crisis in the country and fuelled extremism and the southern separatist movement.

These factors confirm that the achievement of peace in Yemen is more difficult than ever, it said

The British newspaper said that the violence has intensified in the country since the US call for a ceasefire last month, and the fighting in the port of Hodeidah this week prompted the UN envoy to postpone the talks until the end of the year.

The newspaper accused the Houthis - backed by Iran have prevented aid from entering Yemen, used civilians as human shields, and pushed their personnel to concentrate in a hospital, leaving only one hospital in Hodeidah.

The coalition forces are besieging the port--which has been receiving 80 percent of imports--and is carrying out massive air strikes that recently claimed the lives of 40 children on a school bus, the newspaper read.

It concluded by saying that All of this had little effect, and it was necessary to kill Saudi journalist Jamal Khashoggi in Istanbul to push Washington to pass a ceasefire resolution.

It notet that Britain is approaching a stronger stance after ending its opposition to the UN Security Council to put forward a resolution aimed at putting more pressure on Saudi Arabia and the Houthis to end the fighting and allow aid, stressing that but until Britain stops selling weapons to Riyadh and share intelligence information, "We will remain complicit, in the crime.

Yemen has been racked by armed conflict which broke out after the Iranian-backed Houthis had ousted the internationally recognized government in late 2014.

The conflict escalated after a Saudi-led military coalition intervened militarily in the country in March 2015, to reinstall President Hadi and his government, and has left nearly 11,000 people dead, hundreds of thousands injured, 3 million displaced and made other thousands to flee the country.

Yemen is facing the world's worst humanitarian crisis, according to the UN, as more than 22 million people (more than two thirds of the population) are in need for a type of humanitarian aid and immediate protection, including 8.4 million people unsure how to get next meal, and some 2 million children suffering severe shortage of nutrition.