Senate to get briefing on Saudi Arabia that could determine sanctions 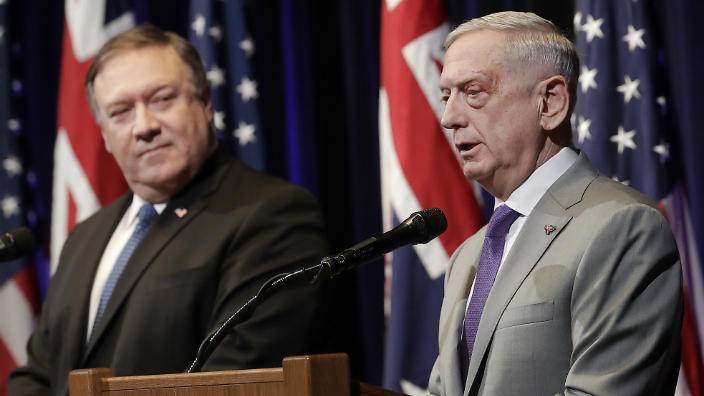 Senators expect to get a briefing next week from senior Trump administration officials on Saudi Arabia that could determine whether Congress goes forward with sanctions on the longtime U.S. ally.

Two congressional sources said an “all-senators briefing” is expected when the Senate returns to Washington after the Thanksgiving recess.

The briefing could determine whether there’s any chance of passing sanctions legislation or blocking a major arms sale to Saudi Arabia in the end-of-year session.

“That will be really important,” said a Senate GOP aide. “I’m not sure adding sanctions will happen but the Saudi situation is not over.”

The scheduled topic of the briefing is the civil war in Yemen, where a Saudi coalition backed by the U.S. military is fighting against Houthi rebels.

However, the topic of Saudi Arabia’s role in the killing of U.S.-based journalist Jamal Khashoggi will also come up during the meeting, as could a discussion about U.S.-Russia policy, said a second congressional source.

The source said Defense Secretary James Mattis and Secretary of State Mike Pompeo will likely conduct the briefing, although that has not yet been finalized.

A State Department spokesman said the department didn't have anything to announce about Pompeo's schedule. The Defense Department did not return a request for comment.

Senate aides warn that the prospects of passing Saudi sanctions legislation in the lame-duck session will be a “heavy lift” because of opposition from President Trump.

The president warned Tuesday that oil prices could go “through the roof” if relations with Saudi Arabia broke down over Khashoggi's killing inside the Saudi consulate in Istanbul last month.

On Wednesday, Trump thanked the kingdom, an influential member of OPEC, for the price of oil dropping to $54 a barrel. And the president continued to emphasize maintaining strong relations with the Saudis on Thursday while speaking to reporters at his Mar-a-Lago resort in Florida, where he was spending the Thanksgiving holiday.

Senate Majority Leader Mitch McConnell (R-Ky.) has warned colleagues that floor time will be limited in the final session of the year and that his top priorities are passing a farm bill and the year-end spending legislation.

Even the criminal justice reform bill, which has Trump’s support, may not see floor time.

But there is growing pressure from GOP senators for the administration to take a tougher stance on Saudi Arabia and its de facto leader, Crown Prince Mohammed bin Salman.

Sen.-elect Mitt Romney (R-Utah) was among the latest GOP senators to criticize the president when he declared late Tuesday that Trump’s statement about U.S.-Saudi relations was “inconsistent with an enduring foreign policy, with our national interest, with basic human rights, and with American greatness.”

“That statement yesterday only made matters worse in some ways for the administration,” said a Senate GOP aide.

Corker criticized the White House for moonlighting “as a public relations firm” for the crown prince and Sen. Lindsey Graham (R-S.C.), usually a staunch Trump ally, warned “it is not in our national security interests to look the other way when it comes to the brutal murder of Mr. Jamal Khashoggi.”

Democrats, meanwhile, piled on with criticism and called on McConnell to bring sanctions legislation to the floor.

Corker and Sen. Bob Menendez (N.J.), the top-ranking Democrat on the Foreign Relations Committee, sent a letter to Trump late Tuesday asking the administration to investigate specifically whether Crown Prince Mohammed was responsible for Khashoggi’s murder.

There’s bipartisan support in the Senate behind the Saudi Accountability and Yemen Act, which would suspend weapons sales to Saudi Arabia, prohibit U.S. aircraft from refueling Saudi planes in the Yemen conflict, mandate sanctions on people responsible for Khashoggi’s death and require a report on human rights in Saudi Arabia.

Still, lawmakers pushing for action are divided over the best approach.

Sen. Rand Paul (R-Ky.), a member of the Foreign Relations Committee who criticized Trump’s statement Tuesday as sounding like “Saudi Arabia First,” says it would be better to focus on blocking a $110 billion arms sale to Saudi Arabia instead of sanctions.

“I think sanctions are a way of pretending to do something,” Paul told The Hill. “It’s a way of acting tough without being tough. Cutting off the arms sales will make them wake up. In fact, their air force would be grounded in two or three months if they don’t have spare parts.”

GOP aides say the lack of a consensus plan on how to move forward on Saudi Arabia will make it tougher to pass sanctions legislation in the lame-duck session.

“There are too many things that people want to do and that makes it hard,” said one GOP aide.