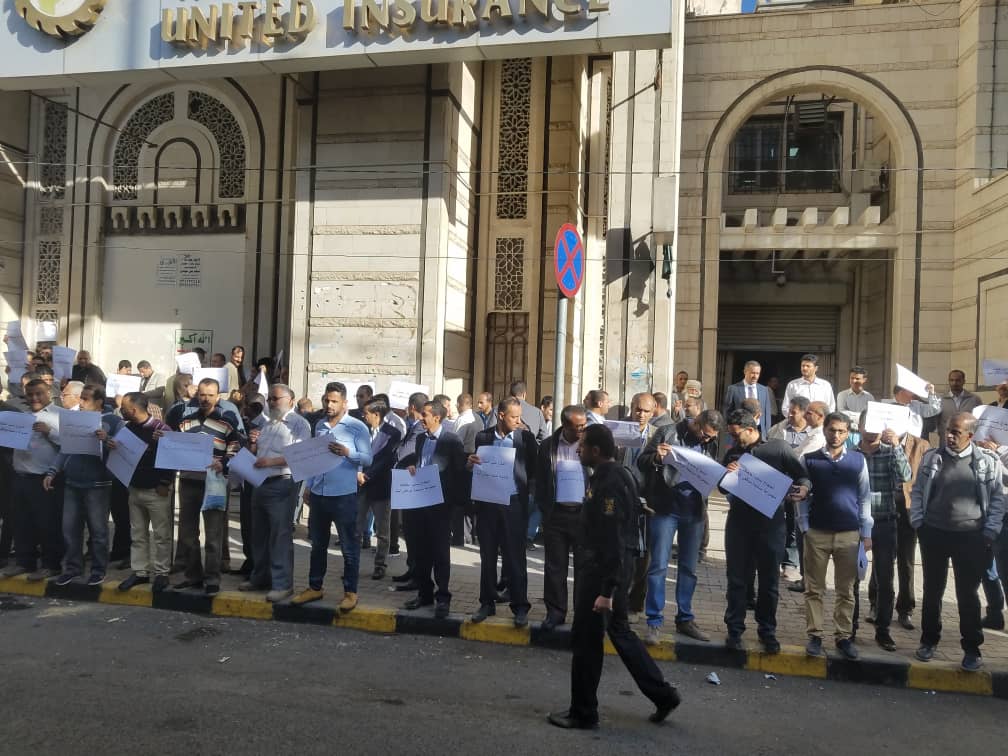 Tadhamon International Islamic Bank's (TIIB) staff in the Yemeni Houthi-held capital of Sana'a on Monday took to street demanding the rebels to release their colleagues, who were arrested at the TIIB's headquarter on Sunday.

At a protest staged Monday on Zobairi Street, the bankers held Houthi authorities responsible for their coworkers' health, calling upon legal bodies, NGOs, Yemeni banks association and Central Bank of Yemen to intervene and help free the arrestees.

They condemned the "illegal practice of militants" whom they accused of "kidnapping workmates from workplace without legal reasons."

Following the arrest, Hayel Saeed Anam trading group has decided to close its TIIB's headquarters and branches in Sana'a in protest of Houthi harassments and pressures.

TIIB paused on Sunday its Sana'a-based head office's functions and closed all its branches in the rebel-held capital, media reported Sunday.

Houthis asked the bank to give them detailed financial statements and reports, as they cast doubts on data presented by TIIB to the rebel-run Central Bank of Yemen in Sana'a, according to the local website.

The most significant investments of Hayel Saeed Anam giant group, TIIB is one of the largest commercial banks in Yemen, with capital of some 20 billion Yemeni rials. It is one of four banks licensed to work under Islamic banking in Yemen.

Banking and financial sources said Houthisstormed the bank and arrested staff to press for low exchange rate for a loyal merchant, Yahiya al-Habari, while the rebels accused the bank's officials of refusing to pay 2018 profit tax.

According to media sources, the Iranian-backed Houthi group late last January asked commercial banks working in rebel-held provinces to pay up to 30 percent of their 2018 annual profits, as contributions to warfare and for other reasons.

Still, Houthis refuse to deal with statements issued by banks on their own net profits, say media economic reports.

Yemeni commercial banks whose headquarters in Sana'a have been experiencing complicated problems resulted from Houthi practices.

However, the rebels "arrested two of the bank's staff and detained them as hostages until submission of the three officials over alleged charge of foreign money manipulation."

According to the source, some commercial banks are planning to close their Sana'a-based headquarters and branches and move to Aden, seat of the official Yemeni government of President Hadi.