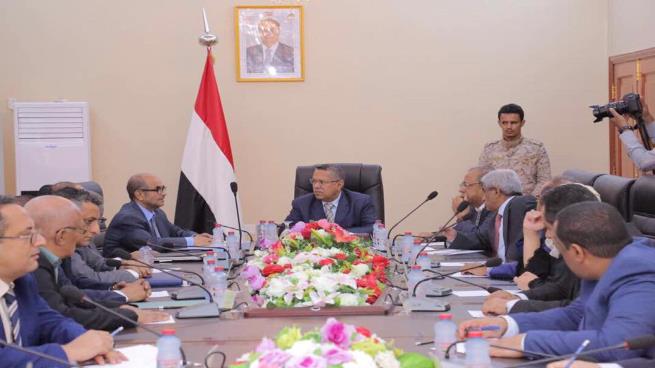 The Internationally recognized government of Yemen has rejected preconditions of the Houthi Group, Ansar Allah, for restarting the peace process and handing over control of western Hodeida province, the Asharq Al-Awsat newspaper reported on Wednesday, quoting well-informed sources.

The preconditions were put forward at meetings of Houthi leaders with the UN envoy to Yemen, Martin Griffiths, in Sanaa this week.

They included lifting a blockade on Yemeni air and sea ports which was imposed when a Saudi-led military intervention began in 2015 to prevent weapons from reaching the Houthis and that the Saudi-led coalition does not target Houthi leaders and the government does not advance toward more Houthi-held regions.

Saudi Arabia has been leading an Arab coalition of nine countries against the Houthis to restore the government of President Abd Rabbuh Mansour Hadi.

They also included that the government pays salaries for state employees in the Houthi-run regions, a demand which spokesperson for the government, Rajeh Badi, responded to by saying that the Houthis seized $3.5 billion from the Central Bank of Yemen and spent them on their war. Badi said the funds could have covered the salaries of the employees for one year.

The newspaper also quoted the sources as saying that president of the supreme Houthi political council, Mahdi Al-Mashat, failed to get a statement from the UN envoy recognizing the Houthi government.

The Houthis refused to hand over the Hodeida seaport to the government but hinted at the possibility of putting it under UN supervision while they keep their control on it, the paper said.

Separately, locals said coalition warplanes have dropped leaflets in Hodeida province, 260km west of the capital Sanaa, warning the people to stay away from Houthi positions and to take arms against the Houthis when the pro-government and coalition forces launch an offensive to retake the province.

The warning coincided with statements by political sources in Sanaa that the UN envoy's mission failed because of impossible Houthi conditions.

The Houthis demanded international assurances for withdrawal of the coalition forces from Yemen in return for handing over the Hodeida seaport and that the UN should condemn the killing of former president of the supreme Houthi political council, Saleh Al-Samad, the sources said, according to the paper.

Al-Samad was killed in a coalition drone strike in Hodeida more than a month ago.

In the past few weeks, the pro-government forces with support from the coalition battled and advanced over the Houthis in Hodieda and pushed deeper to within 10km from its seaport.

The government and the coalition have said they are seeking to take this seaport in order to cut off the smuggling of Iranian weapons to the Houthis.

The UN envoy, Griffiths, has expressed his concern about the impact of the offensive on the political process, coinciding with warnings by international organizations that the offensive could lead to the closure of a vital lifeline to millions of starving Yemeni people and then deepen the humanitarian crisis in the country.

Yemen is facing the world's worst humanitarian crisis. The UN has lately warned that a further 10 million people will starve to death if the situation does improve, bringing the total of the starving people to 18 million by the end of the year.

Around 22.2 million people are in need of humanitarian and protection assistance after three years of the conflict, the UN said.