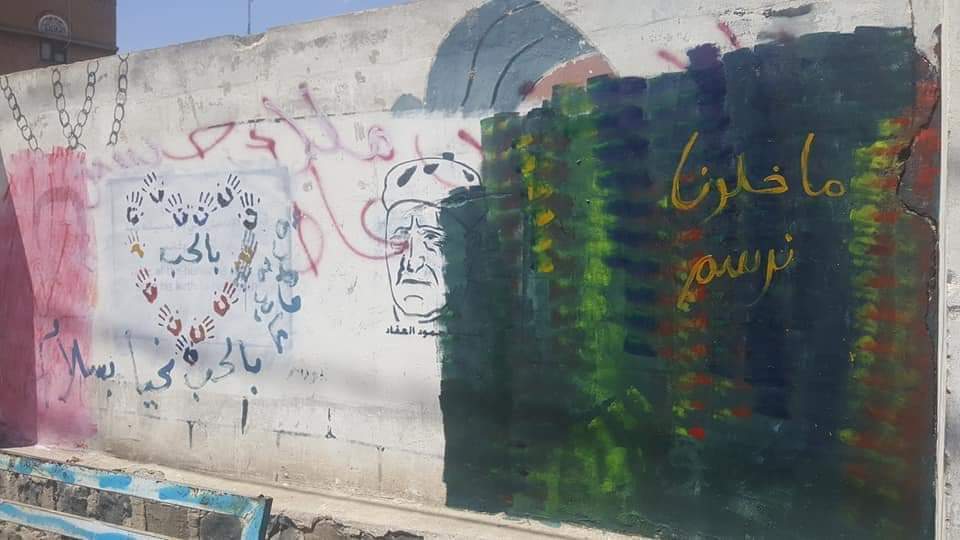 Youth artists started on Thursday to paint murals reflecting their fear and dreams in the capital of Yemen, a country racked by an armed conflict between Iranian-backed Houthi rebels and internationally-recognized, Saudi-backed government.

A set of young women and men took to streets of Sana'a to participate in an open-air exhibition the Houthi group prevented to be accomplished.

"Street arts in Yemen cannot be separated from, but rather an integral part of, community," said one of the event's organizers, hoping that life would return to Sana's through his artist works.

"Audience are not just viewers, but participants in these workers," added Thu Yazan al-Alawi on Facebook.

"Even if murals are effaced or replaced by slogans of war and death, the message adopted by street arts has been already conveyed."

Another painter, Hifa'a Sobai'e said "we are here to establish the culture of arts and spread peace, while trying to revive what we have lost by the war that devastated Yemen. We hope Yemen will get back as it was."

As passersby of different ages stopped before murals to enjoy themselves with artists' works, Houthi militants fell unexpectedly upon the venue and stopped the activity, according to Yemeni activists.

Houthi armed men forced artists to come back home, said Wameedh Shakir, a Yemeni activist, on Facebook, despite a prior permission obtained from the rebel-run authorities in Sana'a.

Houthis asked the participants to direct their murals against the legitimate government and backing coalition, or to go home, she added.

It has not been possible to obtain a comment from Houthi officials on the issue.

Maisa'a al-Absi, a participant artist, said "I had yet to finish with my mural ... They prevented us from painting and wiped out the murals despite the permit."

However, she added on Facebook, "it's enough [for us] that we took to street, painted and expressed" our thoughts.

The open day of arts is an annual event that was called for by a set of artists in 2014 and has been since carried out in some Yemeni cities, including Sana'a.

Yemen conflict escalated after a Saudi-led coalition intervened militarily in the country in March 2015 to reinstate the government of President Hadi, leaving tens of thousands killed, hundreds of thousands injured, and 3 million displaced.

It has also pushed the country to the world's worst humanitarian crisis, according to the UN, with most of the population in need for a type of humanitarian aid and immediate protection, including 8.4 million people unsure how to get next meal, and some 2 million children suffering severe shortage of nutrition.