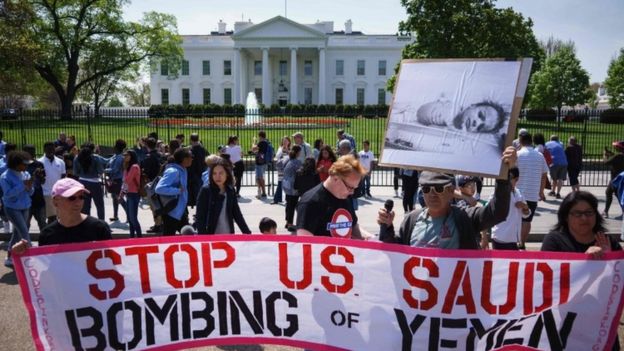 The Guardian, in an article by Simon Tisdall Thursday, dubbed President Donald Trump's veto against halting the US support for Saudi war in Yemen as scandalous abuse of presidential power.

Expected or not, Donald Trump's vetoof a bipartisan Congressional resolution to end US military involvement in Saudi Arabia's murderous war in Yemen is an outrage. It will prolong the unspeakable suffering of millions of Yemeni civilians, the blameless victims of Riyadh's vicious proxy war with Iran and its Houthi allies.

Trump's stated reasons for the veto ranged from specious to risible. He claimed to be protecting American citizens – even as he denied directly assisting the Saudis and said there were no US regular troops in Yemen. So which is it? The Americans Trump referred to, mostly resident in Gulf states that back the Saudi-led coalition, were at risk from Houthi "explosive boats", he said. They may also face danger when transiting Riyadh airport. In reality, no US citizen is obliged to brave such shocking perils, and very few have.

Yet Yemen's civilians have no choice.

Trump also rejected the resolution as "an unnecessary, dangerous attempt to weaken my constitutional authorities". Yet on the contrary, his action amounts to flagrant defiance of the 1973 War Powers Act that checks a president's ability to engage in armed conflict without express consent of Congress. Although interpretations differ, this is not a partisan point. It is a matter of constitutional law. And it's a precedent. This was the first time in history that a War Powers resolution had passed from House and Senate to the president's desk.

Since the beginning of the war, the US has backed the coalition bombing campaign with weapons sales and, until recently, midair refueling support for aircraft.

US drones also sporadically strike sites thought to be of Al-Qaeda and ISIS groups in Yemen.