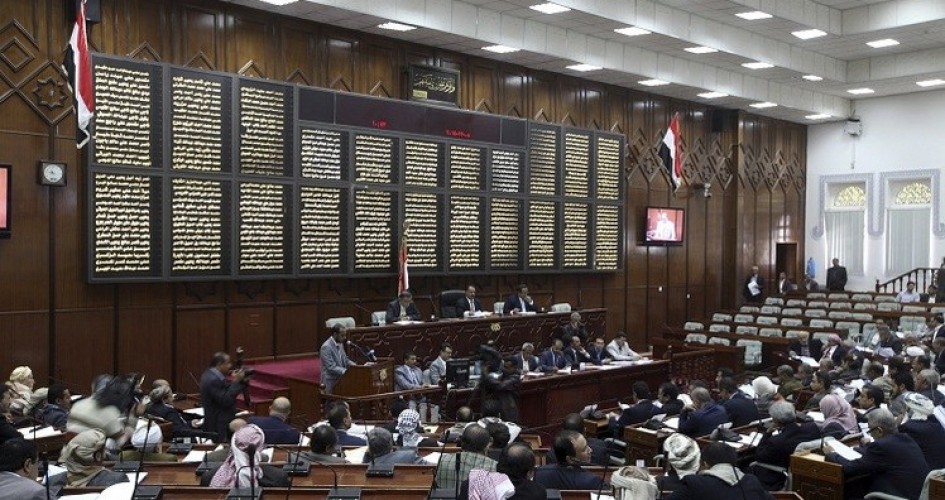 The European Parliament tends to recognize the Sana'a-based Houthi-controlled Yemeni Parliament, a move that, if adopted, would be a slam to the country's internationally-recognized government and its backing Saudi-led coalition.

Political efforts by the Houthi politburo have succeeded to convince key members in the EU Parliament into visiting Sana'a and meeting with the Houthi-held Parliament and its Speaker Yahiya al-Raa'i, the Yemeni Aden-based al-Ayam paper on Thursday quoted EU parliamentary sources as saying.

When paid, this visit would mean an official recognition by the EU Parliament of the Sana'a-based Parliament, EU parliamentary official said on condition of anonymity. The opposite is true for the Parliament held in Seyoun.

No arrangement for the visit has been issued so far other than the entry visas, which are expected to be officially presented to Yemeni foreign ministry, according to the paper.

Houthis, by this move, intend to extract an international recognition of the Sana'a-based Parliament as the Yemeni people's only representative with exclusive right to approve any applicable peace pact.

On the 9th of last November, speaker and MPs of the Houthi-run Parliament participated by video in an EU parliamentary conference held at the French Parliament, despite rejection by the Yemeni government.

"Peace is our sought aim, and for which we extend our hands through you and all peace lovers," the Sana'a-based Saba quoted then Speaker Raa'i as telling the conference.

On 13 April,the Yemeni Parliament held its first session in Seyoun under legitimacy since war started in March 2015,between the Yemeni Saudi-backedgovernment's forces and the Iranian-backed Houthi rebels who ousted the government in September 2014.

On 13 April, Houthis announced in Sana'a the commencement of by-election to fill in vacant seats in areas under their control.

The Yemeni Parliament has been experiencing division following the war, with most of its members in Houthi-held areas holding semi-regular sessions in Sana'a, including Speaker Raa'i. But their number has increasingly declined after former president Ali Abdullah Saleh was killed in his house by Houthis on the 4th of December, 2017, two days after he had declared his GPC party's disconnection from partnership with the rebels and called for uprising against the group.

Houthis have been unable to meet quorum needed to hold a session in an area under their control, giving the way for Hadi administration to attract the larger number of MPs and bring them together.

A Parliament session requires the quorum of 137 MPs to be held. The Yemeni legislature consists of 301 seats, but 32 of them are now vacant.