BBC asks if Saudi Arabia and the UAE achieved anything in Yemen war? 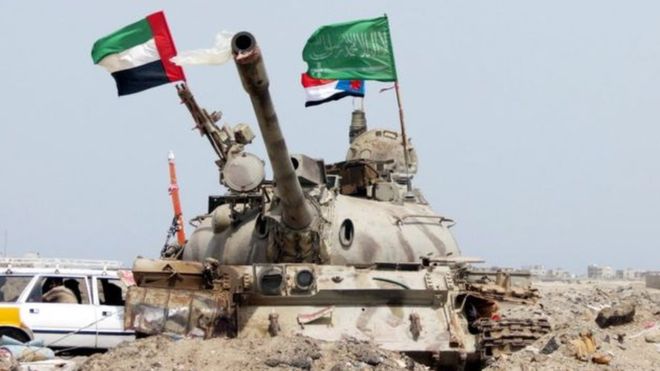 The BBC said the partial withdrawal of UAE troops from Yemen will take place this summer, while the war is still going on, raised an important question: has anything been achieved by anyone in this conflict?

The BBC, in a report by its security correspondent Frank Gardner, said: Even the United Arab Emirates (UAE) - Saudi Arabia's closest ally - pronounced on 22 July: "There was no easy victory and there will be no easy peace."

Let's start with the downside. What has been lost and the scale of the disaster here is quite staggering.

The Yemen war, now in its fifth year, has rightly been branded the worst humanitarian crisis of our time. Estimates of those killed range from 10,000 to more than 70,000, the vast majority being Yemenis and an estimated two-thirds of those deaths from Saudi-led air strikes.

According to the UN's Under-Secretary General for Humanitarian Affairs, Mark Lowcock, there are more than 30 front lines; more than 3.3 million people have been displaced; and 80% of the population need assistance and protection, including 10 million now reliant on food aid.

Transpose those figures on to a UK population and it would notionally mean 53 million people needing help and protection.

So Yemen, already the Arab world's poorest country, has been plunged ever deeper into poverty and economic disaster.

This year, the Yemen war is already spreading beyond its borders, with missile and drone attacks by Houthi rebels on Saudi border towns, on shipping in the Red Sea and reportedly even on targets as far away as Riyadh and the UAE.

Yet for Yemen's legitimate, UN-recognised government and its Saudi and Emirati backers, this war has always been about preventing an unacceptable takeover of the country by a tiny minority with links to Iran - the Houthis. And in that, they have succeeded, albeit at a terrible price paid by the people of Yemen.

The war did not begin with the Saudi-led air campaign in March 2015. It began six months earlier when the Houthis, a small, largely unheard-of Yemeni tribal group from the mountainous north, marched on the capital, Sanaa, and evicted the legitimate government.

Then, with the backing of forces loyal to the ousted former Yemeni President Ali Abdallah Saleh, the Houthis took over most of the populated areas of Yemen.

For Saudi Arabia, Iran's regional rival, this felt like an Iranian-backed coup on its southern frontier and the ruling princes resolved to act.

When I visited its operations centre in Riyadh in April 2015, the coalition spokesman was confident that within a few months Houthi resistance would crumble and they would effectively sue for peace. Yet more than four years on, the air strikes continue. There have been peace talks, but no peace.

So has the war achieved nothing? That is certainly how it looks to much of the rest of the world.

And the British government has found itself dragged into court, accused by human rights activists of providing weapons and munitions to the Royal Saudi Air Force which has, on several occasions over the past four years, bombed schools, hospitals, market places and funerals, killing civilians.

The Houthis, too, have committed alleged war crimes but Britain isn't supplying them.

The UAE, which at one point had up to 7,000 troops deployed in Yemen, has now reduced its contingent there to a few hundred, leaving the Saudis and their Yemeni allies to fight the Houthis, who remain firmly embedded in and around the capital and the north of the country.

The UAE view is that its participation in this war has helped achieve several things. It has prevented a Houthi takeover of the whole country, which it considers would have ultimately given Iran control over the strategic Bab al-Mandeb Strait between Africa and Arabia. Also, it has "liberated" most of Yemen and undermined the al-Qaeda in the Arabian Peninsula group.

For Saudi Arabia, though, which has sunk billions of riyals into this war, and which now finds its towns and airports regularly targeted by increasingly sophisticated Houthi drones, the gains are less clear.

Michael Stephens, a Gulf expert with the Royal United Services Institute (Rusi) think-tank in London, believes the war has been damaging for the Saudis as well as for Yemen.

"The war has produced little of benefit for Saudi Arabia and strategically you could say that Riyadh is in a weaker position than it was in 2015," he said.

"In contrast, the UAE has been able to achieve a number of tactical and political goals which have reinforced its position as a growing regional power."

Meanwhile, the much-heralded Stockholm peace talks of last December have failed to translate into a lasting peace deal - or even a lasting ceasefire. While others can debate what they have gained or lost in Yemen, that country's agony continues.