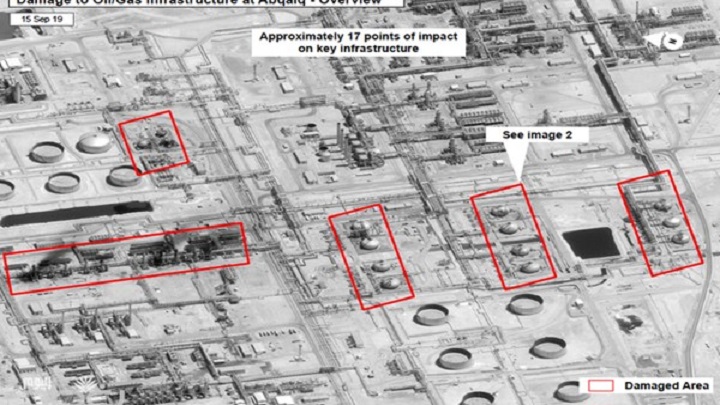 The bold statement by the Secretary of State Mike Pompeo, that Iran is responsible for the attacks on Saudi two oil facilities, was not supported by evidence, The Guardian said Monday, it rather quenchesthe possibility that Trump would search any meeting with Tehran soon or hold talks paving for peace with Houthis in Yemen.

Europe has not pointed fingers at any side until now, the British paper added.

Having condemned the attack in statement, Britain did not directly blame Iran, but called on Houthis to stop their activities.

The Times dubbed the attack as unwise escalation by Iran or one of its proxies, as it would not help bring peace or stability for the region.

The Gulf was a stage for a number of heroes and many evildoersin the past four years, when Saudi Arabia has been launching a bloody campaign on Yemen against Houthis, who are accused of breaches against human rights and backed by the Iranian regime, said the paper.

The Iranian regime is determined to undermine the western alliance, in general, and Israel and the US in particular, with perilous military adventurous sense and provoking nuclear program, it added.

Matters took a dangerous turn Saturday, when the Saudi largest oil-processing facility was under attack, dropping the Kingdom's crude production to half, according to The Times.

The strike has caused a 5% decrease in the world's oil supply, the minimum impact of which would be worries at global markets. When oil supply decreases, the affect extends into fuel-fed plants, factories and stock markets.

In addition to the economic impact, the strikes would also further hostility towards Iran, both in the White House and in Saudi Arabia.

After the US President Donald Trump had sacked his national security advisor, John Bolton known of his drastic tendencies, the United States seemed to be preparing for a kind of approaching Iran, in preparation for his reelection campaign in 2020.

Trump has wanted to talk with the Iranian president, Hassan Rawhani, and he has reportedly soughtlessened sanctions against Iran, the paper said. But, following recent events in Saudi Arabia, that rapprochement is now unlikely.

For the Financial Times, the recent attack on the Saudi oil facilities has unveiled weak spots in the global oil market, shaking the world's confidence in Saudi Arabia as the world's largest dependable oil producer.

The direct question now is how long Saudi Arabia will take to restore its full capacity of oil production, and whether it will be able to stretch its current infrastructure to compensate lost productivity until losses in damaged facilities are repaired.

The most important issue for oil market dealers and for the global economy in general is the damaged image of Saudi Arabia as a country that could not be affected and whose oil production could be disturbed.

The global oil markets should now consider the fact that KSA's enemies are able to launch attacks into Saudi deeps and to threaten its infrastructure and oilfields.