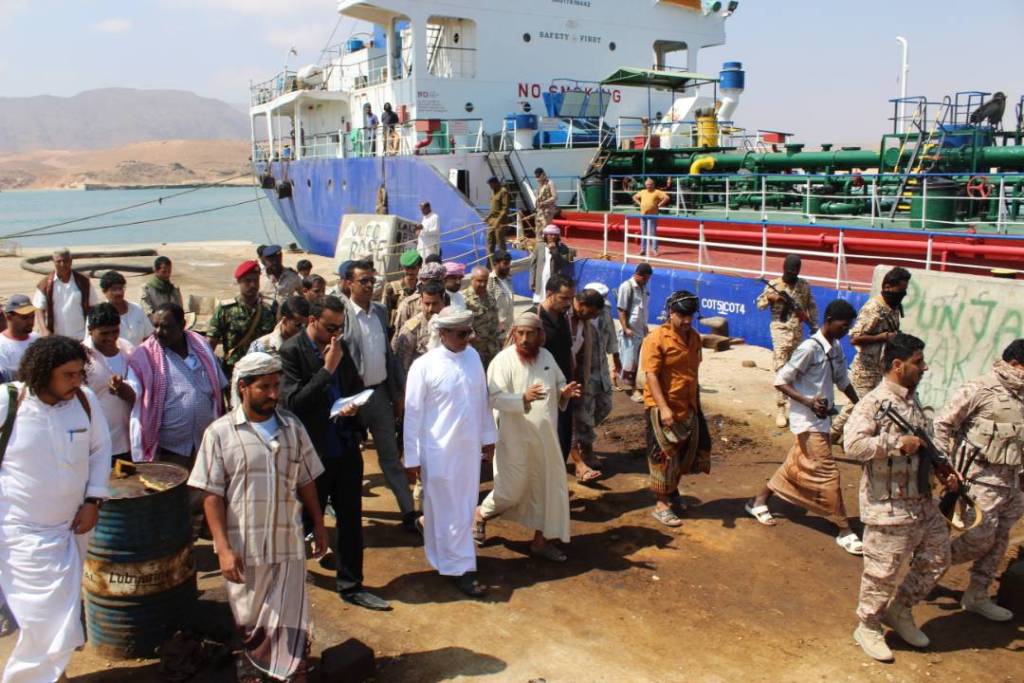 The Kingdom of Saudi Arabia announced on Wednesday commencement of rehabilitating the eastern port of Nashtoon in Mahara, bordering both KSA and Oman, a step seems to be in preparation for laying the Saudi-Arab Sea pipeline through Yemeni lands. This new oil exportation route would serve as Saudi-controlled alternative to that dependent to Hormuz Strait and vulnerable to Iran's threats of closure.

Rehabilitation works at Nashtoon port aim at boosting the export-import capacity, facilitating the upload-discharge of commercial commodities, and supporting the fisheries sector, said the Saudi Development and Reconstruction Program for Yemen (SDRPY).

Services at the Arabian Sea port would also be improved so as to accelerate delivery of food supplies, smoothen access to humanitarian relief and, thus, improve livelihood of locals, the program added on Twitter.

With development infographics of Nashtoon port attached on the tweet seen by Debriefer, the program lauded the rehabilitation as one of its most significant transport and port development projects.

The works would hire 310 people (110 admin staff and 200 workers) and include construction of new buildings, renovation of existing ones, rehabilitation of quays and public-sale spaces for fishers, provision of protection systems, and internal and external lighting equipment.

"Once gets redeveloped, the Nashtoon port would have up to 2,200-ton discharge capacity daily (2,000 tons of oil derivatives and 200 tons of food and commercial commodities)," according to the program. 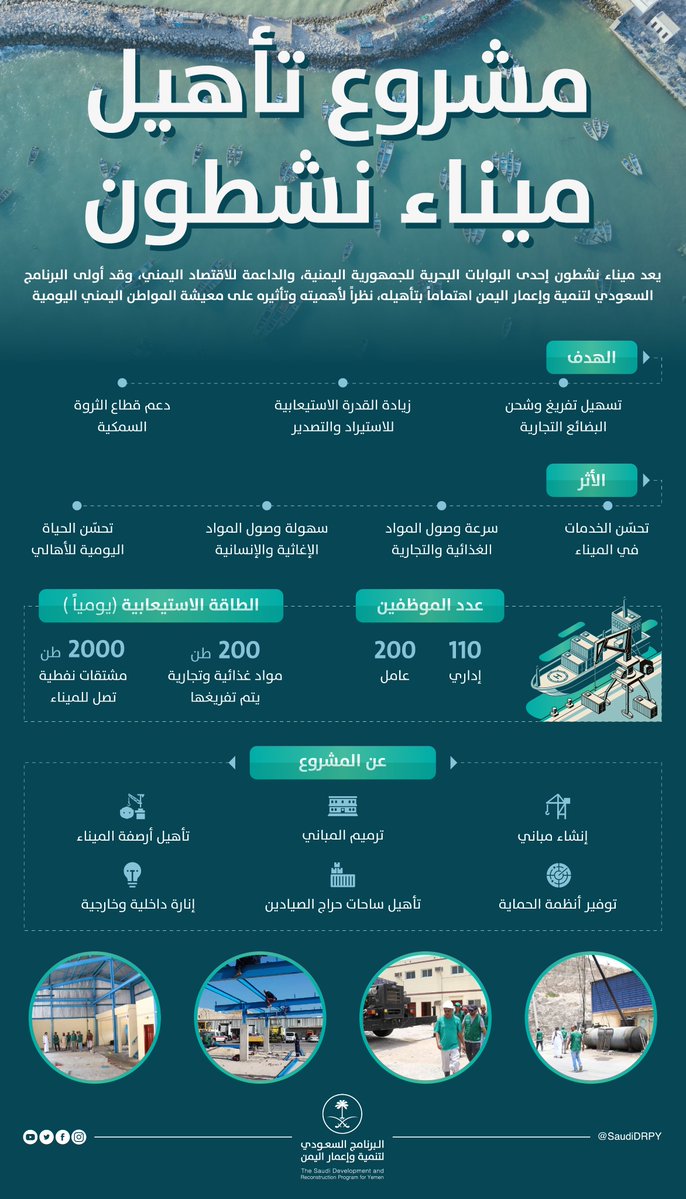 For economists and observers, the Saudi announcement (to start Nashtoon port rehabilitation) comes as part of the KSA's preparation for fulfilling its ambitions in terms of laying a pipeline from its territories to the Arab Sea through Yemeni lands, particularly Mahara where the pipeline would flow into Nashtoon port.

"Saudi Arabia seriously intends to erect an international oil pipeline from the Saudi Khokhair, at borders with Mahara, to the Yemeni port of Nashtoon, adjacent to Omani borders," observers told Debriefer.

Late last year, private sources told Debriefer the Saudis "seek to have a new international oil pipeline leading to Arab Sea and serving as a Saudi-controlled substitute route for the huge gulf oil exportations away from Iran's threats to close Hormuz Strait."

The strait of Hormuz is the world's most important route for oil shipping, through which some 30 tankers pass daily with roughly 15 million barrels of oil crude (or nearly 30 percent of the total oil trade shipped by sea) onboard.

With 10 million barrels of crude per day, the KSA is one of the world's largest oil producers and exports most of its oil on tankers passing the strait of Hormuz, according to data by the US energy info department.

Most of the oil crude exported by KSA, Iran and UAE, as well as all oil exported by Kuwait, Iraq and Bahrain and LNG by Qatar should go through the 34-50-kilometter strait of Hormuz between Oman and Iran.

Saudi Arabia is in a persistent rivalry with Iran over leading the Arab and Islamic world, with Yemen's 4.5-year war serving as the most evident example.

"Saturday attack on Aramco was not launched from Yemen, as claimed by the Houthi group," Saudi spokesman said at press conference, "despite the great efforts by Iran to make the attack appear as if were originated from Yemen.

"This attack was launched from the north, and undoubtedly with support from Iran," Turki al-Maliki added.

The Houthi rebels claimed responsibility for the strike that sparked huge fire at Aramco two facilities. This third attack by the group over four months on the company has knocked down the Saudi production to half – i.e. 5.7 million barrels per day or more than 5% of global supplies.

Saudi Arabia has exploited the 4.5-year war in Yemen, where the Kingdom has been leading an Arab military coalition, to deploy large forces in Mahara late in 2017 and early 2018 when its troops took control of Ghaida airport, Nashtoon seaport and land ports of Shahin and Surfeet, on the pretext of guarding borders and preventing Iranian arms from being smuggled to Houthis.

Since last year, Mahara has witnessed peaceful demonstrations and sit-ins in protest of Saudi military presence and control over border ports and vital facilities.

Protests have escalated into open sit-in condemning the erection of new pipeline supposed to be laid from Saudi Khokhair to Arab Sea through Mahara, and calling for Saudi troops to leave and submit land ports of Shahin and Surfeet, Nashtoon seaport and Ghaida airport to local forces.

Mahara tribal leaders and citizens see the Saudi troops in their governorate as occupation or garrison.

Located at the Yemeni far eastern borders with Oman, Mahara has been kept away from Yemen's crises and conflicts, as neither Houthi troops nor Qaeda or Daesh militants have arrived in the governorate that has remained under control of legitimate government and Saudi forces.

The 67,297-km2-area Mahara has some 500-km coastal line overlooking the Arab Sea, and borders with Oman (to the east) and the Empty Quarter Desert to the north, making its strategic location sought-after by foreign powers. 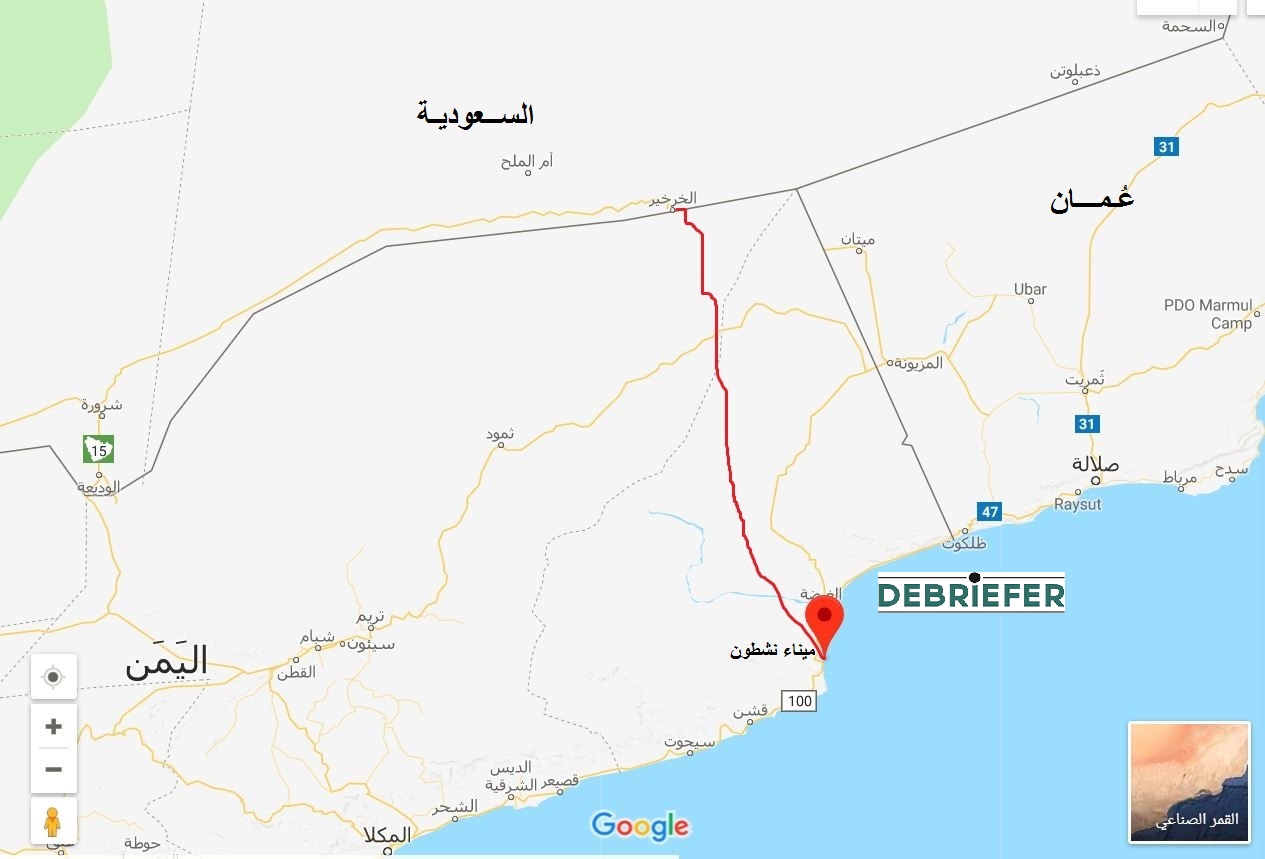 The Saudi ambition is not new, as the Kingdom has always sought – particularly during the reign of late President Ali Abdullah Saleh who made inapplicable conditions – to lay the Saudi pipeline on Yemeni lands.

But, with most of control over Yemen in the Saudi-led coalition's hands, conditions today are more suitable for the KSA to fulfill ambitions.