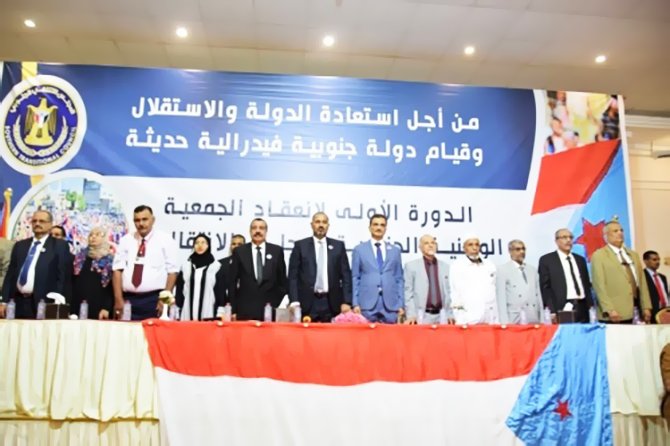 The Southern Transitional Council slammed and threatened the internationally recognized government of Yemen on Sunday as it has started a new slogan within its struggle to establish an independent southern state.

President of the council and former Aden governor, Aidarous Al-Zubaidi, said at the meeting of the council's national assembly in Aden: "In the past period, we have faced several developments and different issues the first of which was the file of the government of Ahmed Ubaid bin Dagher which has exercised systematic torture to subject people and force them to drop their goals".

"This government has faced us with the card of services, wages and the policy of starvation and deprivation. The situation developed further when it used of force against those who took to streets to peacefully demand their rights forcing the southern resistance to defend the souls of the people. We will definitely do this role if someone threatens the lives of our people," he added.

At the meeting, the council raised the slogan "toward restoring the state, independence and establishing a southern federal state" instead of its previous slogan "South Arabia Republic".

Several council leaders including Salafist Hani Ben Breik did not attend the meeting.

"The Arab coalition intervened as a mediator between the two sides "the council and the government". Because we are peace supporters, honest and always choose peaceful ways and drop violence, and in fulfillment of our alliance with the coalition's member states, we responded to the call of Saudi Arabia and the United Arab Emirates by choosing truce," Al-Zubaidi added.

Chairman of the assembly and former Hadramout government, Ahmed Saeed bin Breik, said: "we will not be except on the side of our people against any attempts aimed at detracting their goals, starving them and depriving them of simplest services".

Last week, Al-Zubaidi described the government as a hostile government and that there will not be any solutions in the south except after it is removed and finished.

The UAE-backed council is controlling large parts of Yemen's temporary capital Aden. In late January, it attempted to overthrow the government through a military coup.

An official in the council, who asked not to be named because he was not authorized to speak to media, however said: "Establishing the South Arabia Republic is a strategic goal that will never be abandoned".

Internationally recognized President Abdrabbuh Mansur Hadi returned to Aden along with Prime Minister Ahmed Ubaid bin Dagher on June 14th. They are continuing to run the state affairs from the Ma'ashiq Presidential Palace under protection from Saudi and UAE forces.

Upon arrival, Hadi said: "We will come back again to walk in the future path that the Yemenis drew and agreed on at the comprehensive national dialog conference. The federal state will end our crisis and a war that we were forced to wage to defend the legitimacy and our nation's security".