The Failed Saudi War on Yemen 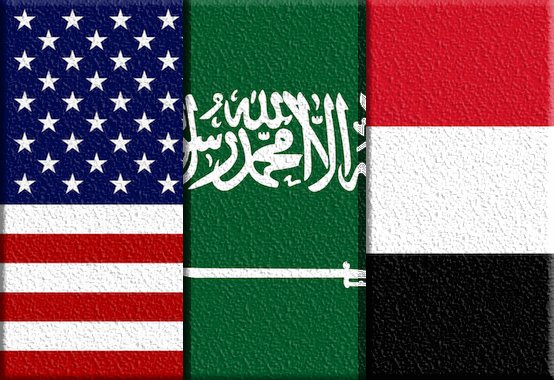 The Saudi coalition war on Yemen has devastated the country’s economy, reduced millions to starvation, caused widespread malnutrition and deprivation, and created the conditions for the world’s worst cholera epidemic, but it has completely failed to achieve any of its goals and has made both Saudi Arabia and the UAE less secure than they were before.

Bruce Riedel explains: "But the persistence of the rebels’ campaign and their escalating threats this month are a clear indicator that the Houthis are still not intimidated by the coalition. The Houthis still control Sanaa and other major cities. The coalition campaign to seize the major port of Hodeidah has not materialized as a lightning or “golden” victory as the coalition promised. It may still turn into a bloody urban battle that grinds down both sides. The Saudis and Emiratis are not eager for a house-to-house battle with the Houthis, which could exact a large number of casualties".

The coalition war on Yemen is like many other reckless and malign military interventions. The intervening governments expect an easy, relatively cheap victory, they fail to anticipate the negative consequences of waging an unnecessary war, they ignore the many obvious pitfalls that await them, and then they blunder ahead without regard for the consequences for themselves or the country they are wrecking. Instead of learning from these errors, the interventionists keep doing the same things again and again in the vain hope that they will work the next time round. After three years of stalemate and slog, the coalition still thinks it can win the swift and decisive victory that it thought it was going to win at the start. On top of all that, the Saudis and Emiratis have exposed themselves to attacks that wouldn’t be happening if they had stayed out of Yemen’s internal affairs. Yemenis posed no threat to their neighbors in 2015, but because their neighbors chose to intervene and attack Yemen they are coming under attack as well. Military intervention typically causes instability and insecurity for all concerned, and the war on Yemen is a perfect example of how it can cause both.

When the Saudi-led intervention began in March 2015, the operation was inaptly named Decisive Storm. The Saudis and Emiratis absurdly believed that they would prevail quickly in an attack on Yemen, which has successfully resisted multiple foreign invasions over the centuries. The Saudis expected Pakistan and Egypt to offer up cannon fodder to fight their war, but both governments wisely demurred from participation in the ground war and Pakistan declared its neutrality in the conflict. Egypt’s government remembered the bitter fruits of its previous quagmire in Yemen in the 1960s and made sure not to repeat that mistake. Despite these very early setbacks, the Saudis and their allies didn’t reconsider or change their position, but plowed ahead blindly and stubbornly. The coalition is not meaningfully closer to achieving its goals than it was three years ago, and they likely never will be. The coalition’s goals of restoring Hadi and expelling the Houthis from Sanaa have always been more ambitious than they were capable of achieving, and this was obvious from the beginning. All that they have done is destroy Yemen and inflict enormous suffering and death on the people of Yemen for the sake of the bad and illegitimate cause of trying to dictate their political future by force of arms. The U.S. should never have taken any side in this conflict, but it has chosen the most indefensible side of foreign governments trying to reimpose a discredited government at the expense of the civilian population.