The Guardian: Why Trump’s Middle East peace plan is just a sideshow 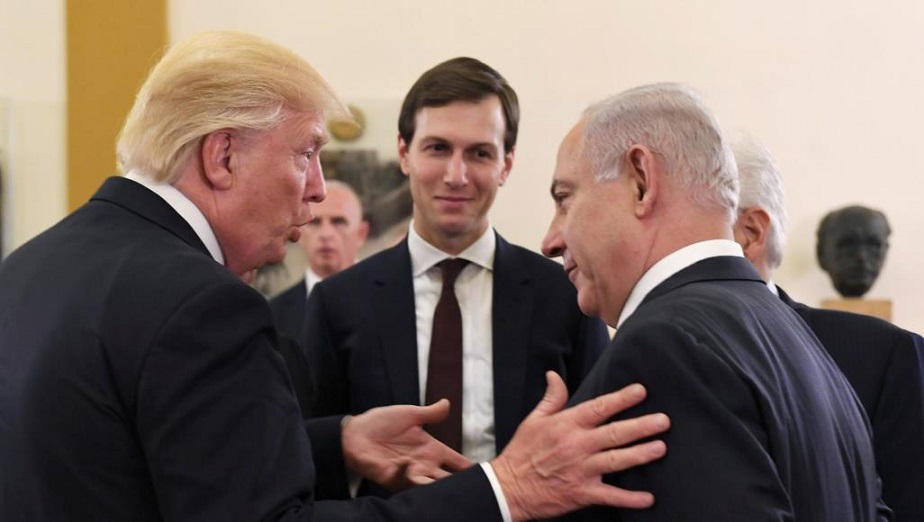 After two years of drum-rolling, Donald Trump’s “ultimate deal” for Israelis and Palestinians is about to enter what its architects claim is the pre-launch phase.

The US president has said the peace plan drawn up by his team – two former personal lawyers and his son-in-law, Jared Kushner – will be ready to unveil by the end of January.

Yet despite the anticipation surrounding Trump’s proposals for resolving one of the world’s most intractable conflicts, a more crucial plan for the region is already being implemented on the ground: an attempt to strengthen Israel’s hand while weakening that of the Palestinians.

One by one, the US has implemented the key demands of Israel’s hardline rightwing lobby, drastically slashing humanitarian aid to the Palestinians, declaring the contested city of Jerusalem as Israel’s capital, shuttering Palestinian diplomatic offices in Washington, and closing its own consulate that serves the occupied West Bank and Gaza.

For Palestinians – and many Israelis – a peace deal is a sideshow. The bigger issue, which does not depend on peace, is the implementation of Israel’s wishes by the most accommodating US administration in its history.

Trump has repeatedly said the measures are intended to force Palestinian leaders – who reject him outright as a biased mediator – into a peace effort. Trump has also said Israel will have to “pay a price” for peace, although has not specified what that would be.

Palestinian leaders have responded by saying there is no genuine plan for a just solution. “It’s really a lie,” said Hanan Ashrawi, a senior Palestinian politician. “Everybody is working on this fictitious concept. [The US] became partners with Israel and they are implementing Israeli policies. All we see are unilateral measures by the US and by Israel … The reality on the ground is now being engineered.”

A state department official said a “high priority” has been placed on achieving a comprehensive deal, but it would be “difficult”. While they would not comment on details of the plan, which is still being drafted, a few aspects are becoming clearer.

First, unlike previous US-led efforts in which it was up to the Israelis and the Palestinians to decide the details, the Trump version will likely be much more specific and prescriptive. In essence, it will be a series of suggestions that detractors say will be heavily focused on Israeli demands based on the political views of its authors.

For example, Jason Greenblatt, who is leading Trump’s team after his promotion to government from chief legal officer at the Trump Organization, has broken US precedent to say Israeli settlement-building in the occupied West Bank – illegal under international law – is not an obstacle to peace.

The US ambassador to Israel, David Friedman, a bankruptcy lawyer who also worked for Trump’s company, has been even more vocal in his support of Israeli settlement construction, and even the annexation of Palestinian territory.

Second, the US will only go so far in pushing the two sides to accept the deal, meaning the plan is liable to collapse. “The parties will need to decide if they think the plan works for them and will make their lives better,” Greenblatt has said. “The parties are the only ones who can make these compromises.”

Critics say it is increasingly apparent that those drafting the plan might not even be betting on its success to achieve their goals, which are already being enforced on the ground.

Trump’s team will know that from Israel’s perspective there is very little appetite for peace compared with the past. An August poll found only 9% of Israelis wanted their government to prioritise reaching a deal with the Palestinians in 2019.

Israel’s prime minister, Benjamin Netanyahu, who is acutely aware of public sentiment as an election approaches, has said he does not see “any urgency” on Trump revealing his peace plan. His former defence minister Avigdor Lieberman was even clearer when asked about a peace deal that could result in Palestinian self-rule: “I don’t care about a Palestinian state,” he said. The justice minister, Ayelet Shaked, said she would tell Trump the plan was “a waste of time”.

A European diplomat in Jerusalem told the Guardian on condition of anonymity that it was “distinctly possible that we could get to the end of Trump’s presidency with no [peace] proposals”.

With few predicting success, Palestinians are presented with two options: accepting a plan drafted by the least receptive US administration to their cause since peace efforts began, or continuing to face punitive measures. If the plan is rejected out of hand, the status quo – in which Israel entrenches its occupation of the West Bank and continues to enforce a blockade on Gaza – will remain.

However, US officials insist that there are genuine peace efforts. The three main architects – Greenblatt, Friedman and Jared Kushner – all come from a business background and their position has been to treat the conflict like a deal. With economic incentives they hope to convince a side that has historically prioritised issues of principle, such as the right of refugees to return to their homes or to call Jerusalem their capital.

“There is no reason the Palestinians (in both the West Bank and Gaza) can’t enjoy economic success and integrate into a thriving regional economy – if they let us help,” the trio wrote in a Washington Post op-ed in July.

Trump also sees any negotiations as transactional, saying he has to force the Palestinians to reach an agreement by weakening their hand through aid cuts. The president referred to his Jerusalem declaration as a bargaining “chip” taken away from the Palestinians.

In a message sent a year ago to other senior officials on cutting funding to the UN agency for Palestinian refugees, UNRWA, Kushner wrote in internal emails obtained by Foreign Policy: “Our goal can’t be to keep things stable and as they are … Sometimes you have to strategically risk breaking things in order to get there.”

Shortly after Greenblatt was appointed last year, Tania Hary, the executive director at Gisha, an Israeli non-profit that promotes the freedom of movement of Palestinians, said her office started receiving calls from his team asking questions on the economy in Gaza, which has been kept under an Israel blockade for a decade.

Greenblatt does not cite the blockade as a reason for the dire humanitarian situation in Gaza, but focuses blame on its rulers, Hamas, and the West Bank-based Palestinian Authority, which has blocked funding to the enclave.

“My impression at the time was that I was being approached by business-minded people who thought they could solve a problem from a business perspective,” Hary said.

“They recognised that there were obstacles to growth that included restrictions on movement and access,” she said, adding that her advice was that Gaza’s problems cannot be solved by keeping it isolated from the West Bank and Israel.

But then they stopped calling. “I’m not sure if that [message] carried through.”