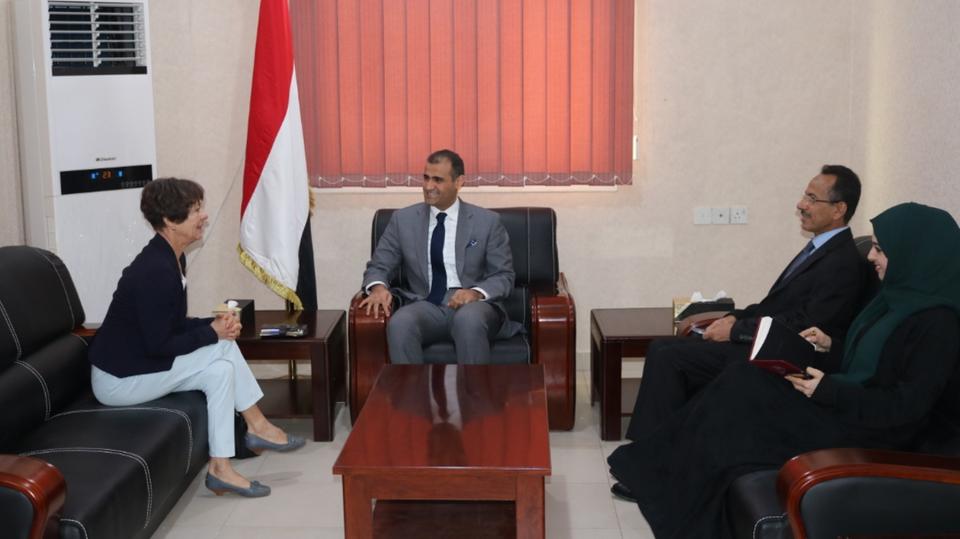 Senior official in the Yemeni government accused on Tuesday Houthis of thwarting efforts at Sweden talks to reach understanding on payment of civil servants salaries and reopening Sana'a airport.

Houthi unjustified obduracy at Sweden talks was the cause for not reaching further understandings in terms of pays and resuming Sana'a airport flights via Aden airport, said Yemeni foreign undersecretary Mohammed al-Hadhrami at his meeting with German ambassador to Yemen Carola Meuller-Holtkemper.

He claimed that Houthi for more than one month "have persistently hindering the application of what was agreed upon in Sweden, while dodging to evade their commitments."

Hadi official called on the UN to "clearly name hinderers in order to reach inclusive, sustainable peace according to three terms of reference."

Yemeni rivals had failed to reach a deal on reopening Sana'a airport at the UN-sponsored talks in Sweden last December, with government suggesting the facility to be opened for domestic flights and Houthis insisting on resumption of international ones.

The Saudi-led coalition, backing internationally recognized government of Yemen against Iranian-backed Houthi rebels, has been imposing blockade on commercial navigation to and fro Sana'a airport since early August 2016, accusing Houthis of using the facility in smuggling arms and people.

Yemenis from northern and western provinces, who wants to travel abroad, have to take up to 15 hours in land trip to the city of Aden or Seiyoun in Hadhramout where the airports provide limited flights abroad.

Hadi senior negotiator, Khaled al-Yamani, had accused Houthi delegation of inflexibility, which foiled an accord on reopening Sana'a airport.

To spare Yemenis the trouble of "travelling in long drives, we asked for travellers to be flied from Sana'a to Aden and then to the world," but Houthi rebels refused, Yamani told reporters following Sweden talks.

Last December, head of Houthi Revolutionary Supreme Committee, Mohammed Ali al-Houthi, threatened of closing Sana'a airport for UN flights, if a deal could not be reached to open the facility for commercial flights.

Separately, Yemeni Prime Minister, at Tuesday meeting with the German envoy to Yemen Carola Meuller-Holtkemper in Aden, discussed developments and issues pertaining to development in Yemen.

Dr. Maeen Abdulmalek highlighted his government efforts to organize its institutions' financial and administrative aspects through adopting a set of economic measures to improve living conditions, and boosting accountability and control.

"Legitimate government seeks to achieve economic recovery, so as to attract capitals to Aden and other freed provinces," added the premier, reiterating the government commitment to paying civil servants and retirees, including those in Houthi-held governorates.

In September 2016, Yemeni President Abd Rabbu Hadi issued a controversial decree, moving the Central Bank of Yemen headquarters from the national Houthi-held capital of Sana'a to his temporary capital of Aden and appointing new governor in place of Mohammed Bin Hammam.

The decision left some million civil servants unpaid for more than two years, most residing in the heavily populated north, aggravating the livelihood and human sufferings.

The decree led to deteriorating economic situation and further mess in a country already the poorest in Arab World, with two rival central banks in Sana'a and Aden.

Economy is one of the challenges faced by the Yemeni official government that has recently returned to Aden to function inside the war-torn country.

Yemeni rial had lost more than three fourths of its value against US dollar since 2015, leading prices to spike with many Yemenis cannot afford basic commodities, foods in particular.

The CBY has been facing difficulties in paying civil servants, on which many Yemenis depend.

Directly linked to most Yemenis' livelihood, unifying the functions of CBY is one of the issues of most concern to Yemeni public opinion, particularly with the hike of food prices coupled with deterioration in national currency.

Economists and observers see government's renewed blames, against Houthis for unpaid salaries and unopened Sana'a airport, as justifications to shirk its national and legal responsibilities.

"Such accusation does not exempt a government, accused of corruption and failure, from being still more accountable for deteriorated economic and social situations," they told Debriefer.

Charges against other party are but for media consumption, economic analysts added, arguing that internationally recognized government is responsible to the whole world for their people.

Civil servants in rebel-held areas are still unpaid, except for those working for revenue-generating agencies, said the analysts slamming Hadi government for failure to fulfill promises it had made to the UN, WB and IMF two years ago when it had decided to move CBY.

Corruption Amounting to Billions of Rials

Most of the hundreds of billions of rials minted in Russia have been paid in the last and this years under orders from President Hadi and his former premier Bin Daghr beyond the public budget, according to recent reports.

Documented charges against Bin Daghr government indicate lavish corrupt deals in oil imports into Aden and other government-held provinces and other delusive projects.

The conflict escalated after a Saudi-led coalition intervened militarily in the country in March 2015 to reinstate the government of President Hadi, pushing the country to the world's worst humanitarian crisis, according to the UN, with more than two thirds of the 28-million population in need for a type of humanitarian aid and immediate protection.